Price assessment for TOP 5 coins from the analyst

Bull markets always attract speculators and novice traders looking to get rich quick. Some traders prefer to set aside caution and use excessive leverage in order to make high profits. While this strategy is very productive during the asset’s upward movement, investments can become steamy due to the use of high leverage when there are drastic corrections.

In the correction period we are in, it is necessary to pay attention. Traders buying from local bottoms are wondering when the uptrend will start again, while some investors are waiting for a moment to buy at a slightly lower price.

Let’s examine the charts of the top 5 cryptocurrencies both to take a look at the change in the market and what may happen in the coming days. 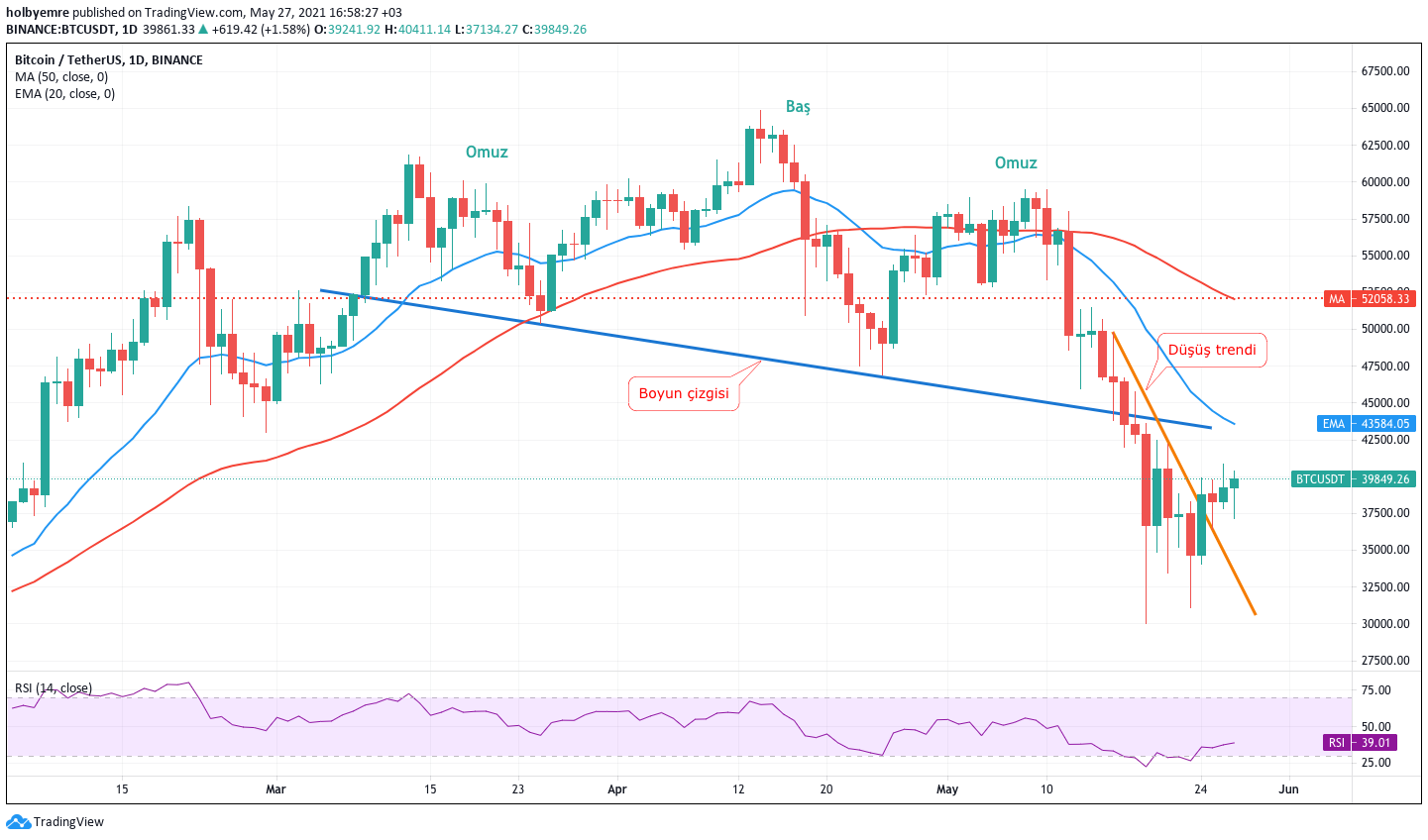 The price rallied as high as $40,841 on a relief rally, but yesterday’s long wick on the candlestick indicates selling at higher highs. The 20-day exponential moving average (EMA) ($43,584) and the relative strength index (RSI), which has a value of 39, are giving the bears an advantage.

If the price drops from the current level, the bears will try to push the price towards $34,000. This level is an important support to consider, as if it breaks, BTC/USDT could retest the psychological support of $30,000.

For the upside move, that is, for the bulls to gain the upper hand again, the price must rise above the 20-EMA and close there. If this turns out to be a reality, the pair could push $50,000 again.

The pullback in Ether (ETH) price broke above the $2,738.74 calculated level at the 38.2% Fibonacci retracement level. This suggests that buying at low levels is increasing aggressively. The bears, on the other hand, are trying to stop the relief rally near the moving averages (MA). 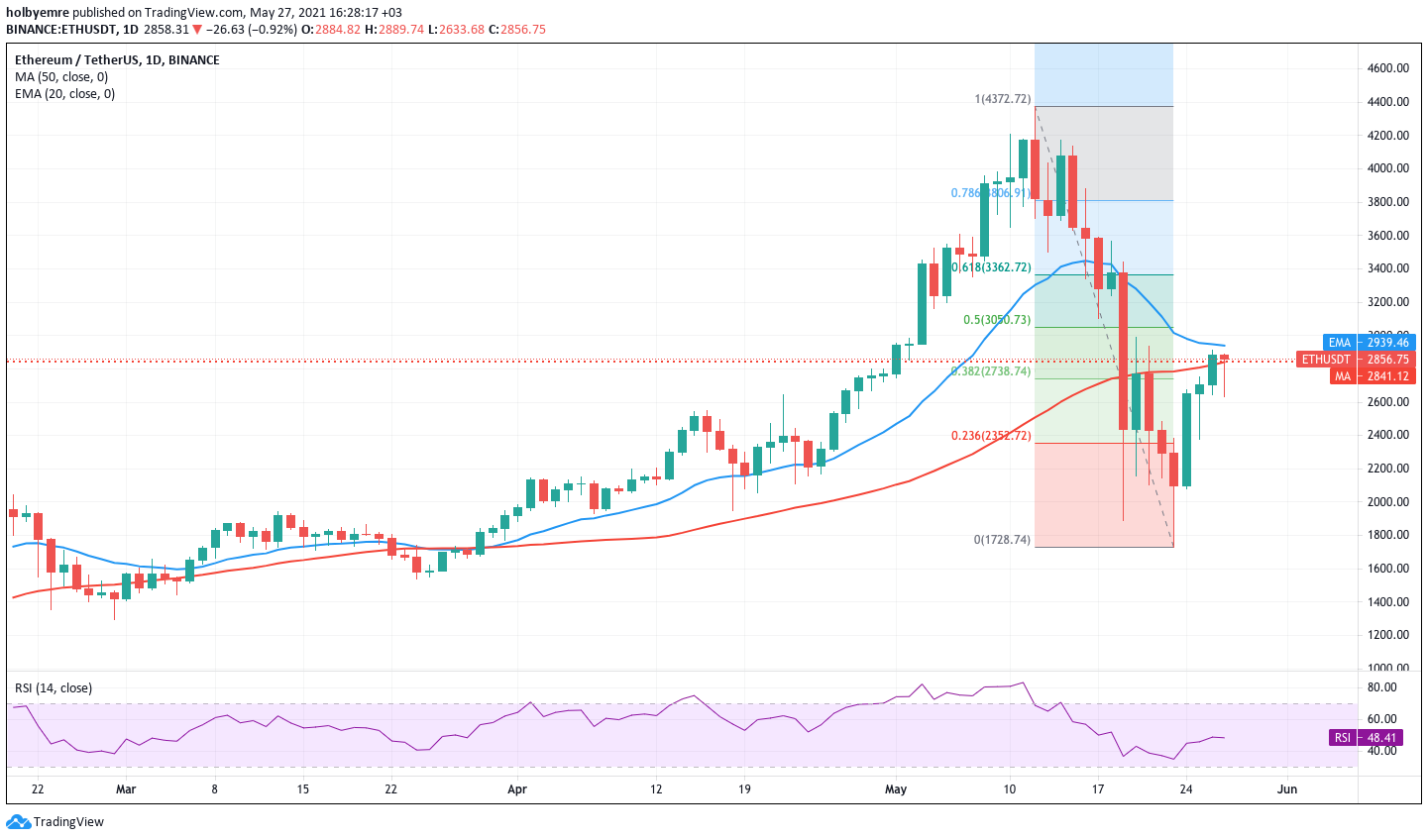 If the price drops from the current level, the bears will try to continue the downtrend. Initial support on the downside is at $2,378.54 on the May 25 candlestick pattern with its long tail indicating strong buying. If this level is also broken, support at $2,000 is likely. If the drop is up to $2,000 and then moves up, the pair will stay sideways for a while.

Contrary to this assumption, if buyers push the price above the 20-day exponential moving average (EMA) ($2,939), the pair could rally to $3,362.72, marked by the 61.8% Fibonacci retracement level. Such a move will indicate the end of the short-term downtrend.

Binance Coin (BNB), which had difficulty in overcoming the resistance of $ 348.70 on May 25, overcame this barrier as of yesterday. The ground has been formed for the price to move towards $428. However, the bears will aim to establish a stiff resistance between the $428 resistance and the 20-day exponential moving average (EMA) ($438). 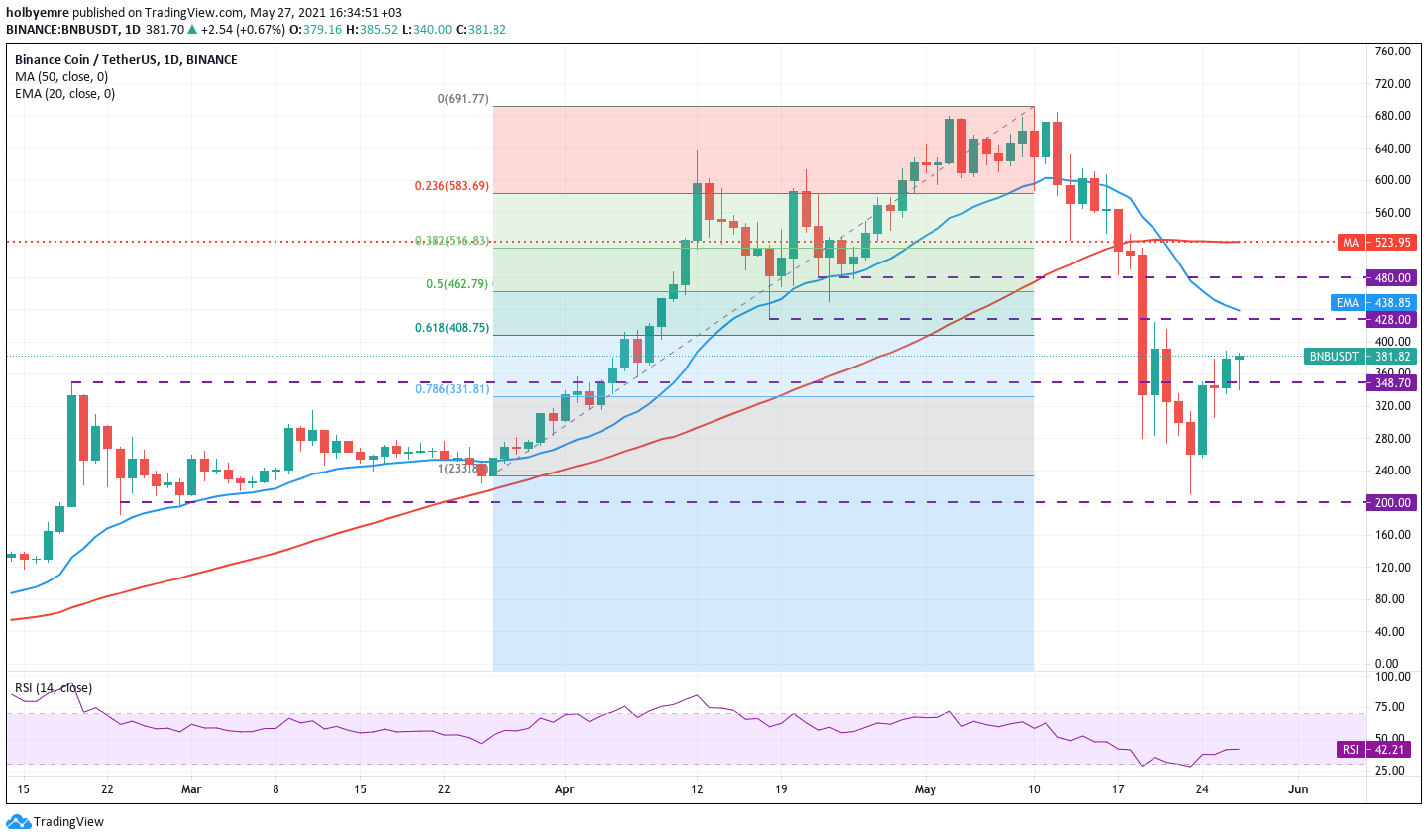 Conversely, if the price fails to hold $348.70 after falling from the strong resistance zone, the pair might correct higher towards $257.40 this time. Such a move would reveal that the bears are increasing selling at higher levels, warning that the local bottom has yet to be discovered.

Cardano (ADA) price formed a doji candlestick pattern on May 25 as the bears strongly defended the 20-day exponential moving average (EMA) ($1.64). After this uncertain pattern, the price started to rise and buyers closed the price above the 20-EMA. 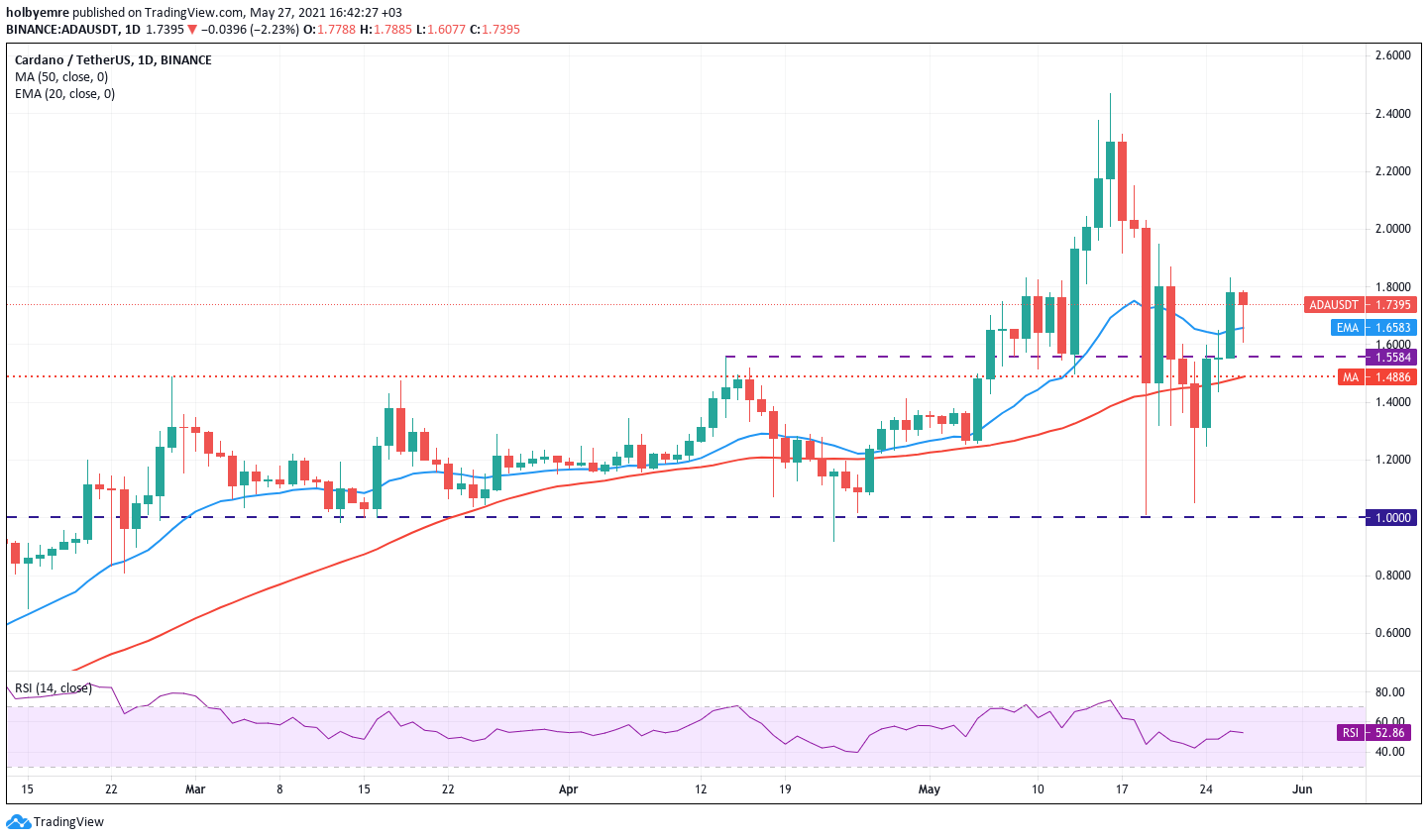 The bulls will now try to push the ADA/USDT pair to $2 and then to the all-time high of $2.47. A break above this resistance could mark the start of the next leg of the uptrend. However, the 20-EMA moving close to the horizontal and the relative strength index (RSI) just above the midpoint say range-bound action may occur for a few days.

If the price climbs as high as $2 and breaks down, the pair could slide as low as $1.55. A strong recovery from this level will keep the pair in the range of $1.55 to $2 for a few days. If the bears pull the price below the 50-day simple moving average (SMA) ($1.48), the range of sideways movement will widen. 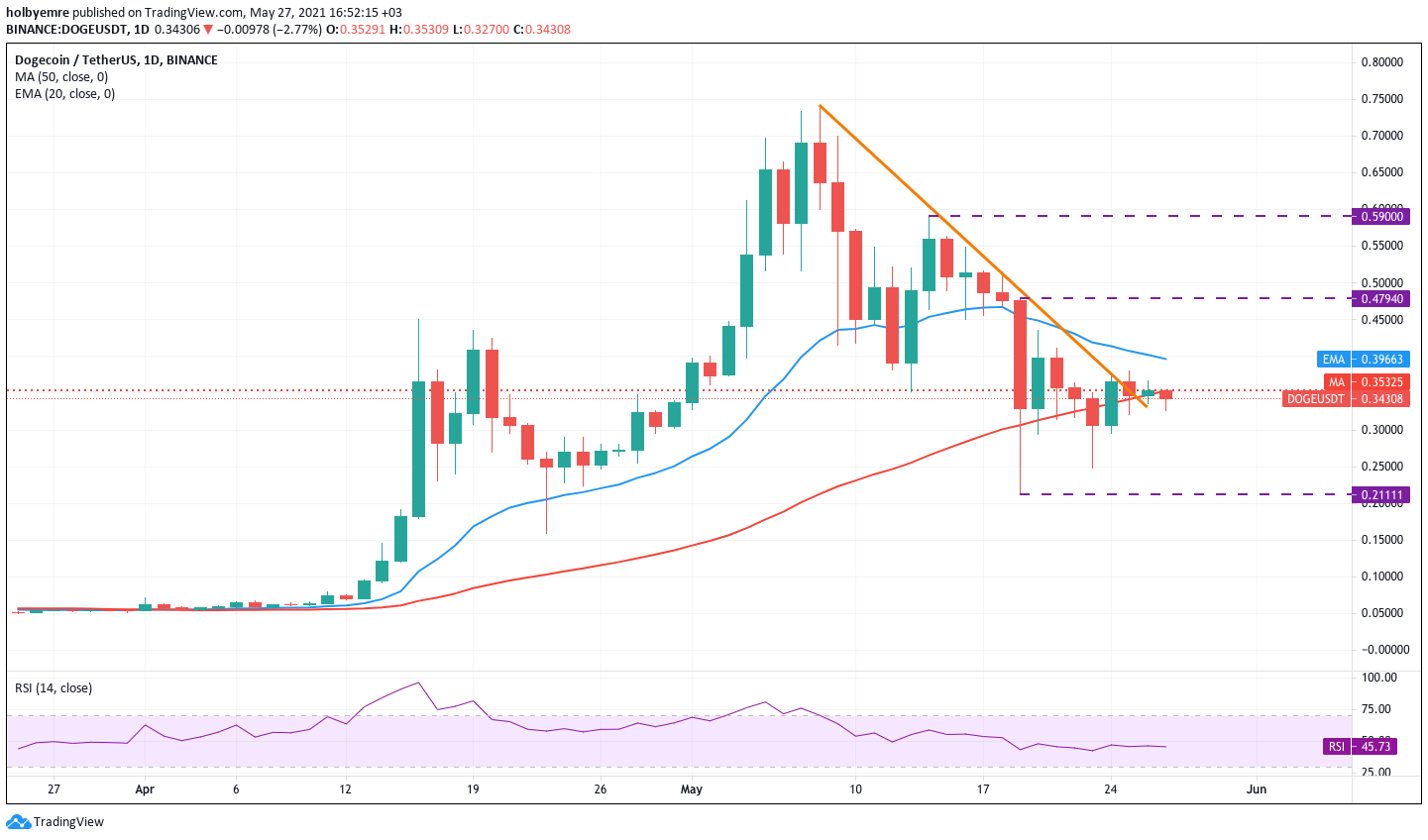 If the bears pull the price back below the downtrend line, it will appear that selling has increased with each small rally that occurs. Subsequently, the price may drop to $0.25 and even retest the $0.21 observed following the panic selling on May 19th.

The 20-day exponential moving average (EMA) ($0.39) and the relative strength index (RSI) below 46 show that the bears are in control of the market. Contrary to this assumption, if the price rises from the current level and rises above the 20-EMA, the pair could go up to $0.47.

The views and comments expressed here are solely those of the author. It may not reflect the views of Cointelegraph. Every investment and trading involves risk. You should do your own research when making a decision.

Share
Previous “Ethereum is MySpace, Bitcoin is Google”
Next Yellen’s blunder, ADP and ISM, Dogecoin craze, oil near $70 – What’s going on in the markets? By Investing.com