4 altcoins to watch this week other than Bitcoin

When Bitcoin (BTC) price struggled to rise above $ 50,000, investors began to turn their positions to altcoins. Glassnode data says that whale addresses with more than a thousand BTC fell from 2,500 to 2,100 in February.

As of May 17, it can be said that there is a significant movement in the price of 4 altcoins other than Bitcoin. Cointelegraph analyst Rakesh Upadhyay shared technical analysis and price evaluation for the 4 prominent altcoins of the week.

Although it has been observed that the bulls have increased purchases in the last days of the shoulder head and shoulders formation formed in the bitcoin price, the long wicks in the candlesticks show that profit taking has taken place. At the moment, the trend has changed to focus on sales rather than increase purchases during dips. 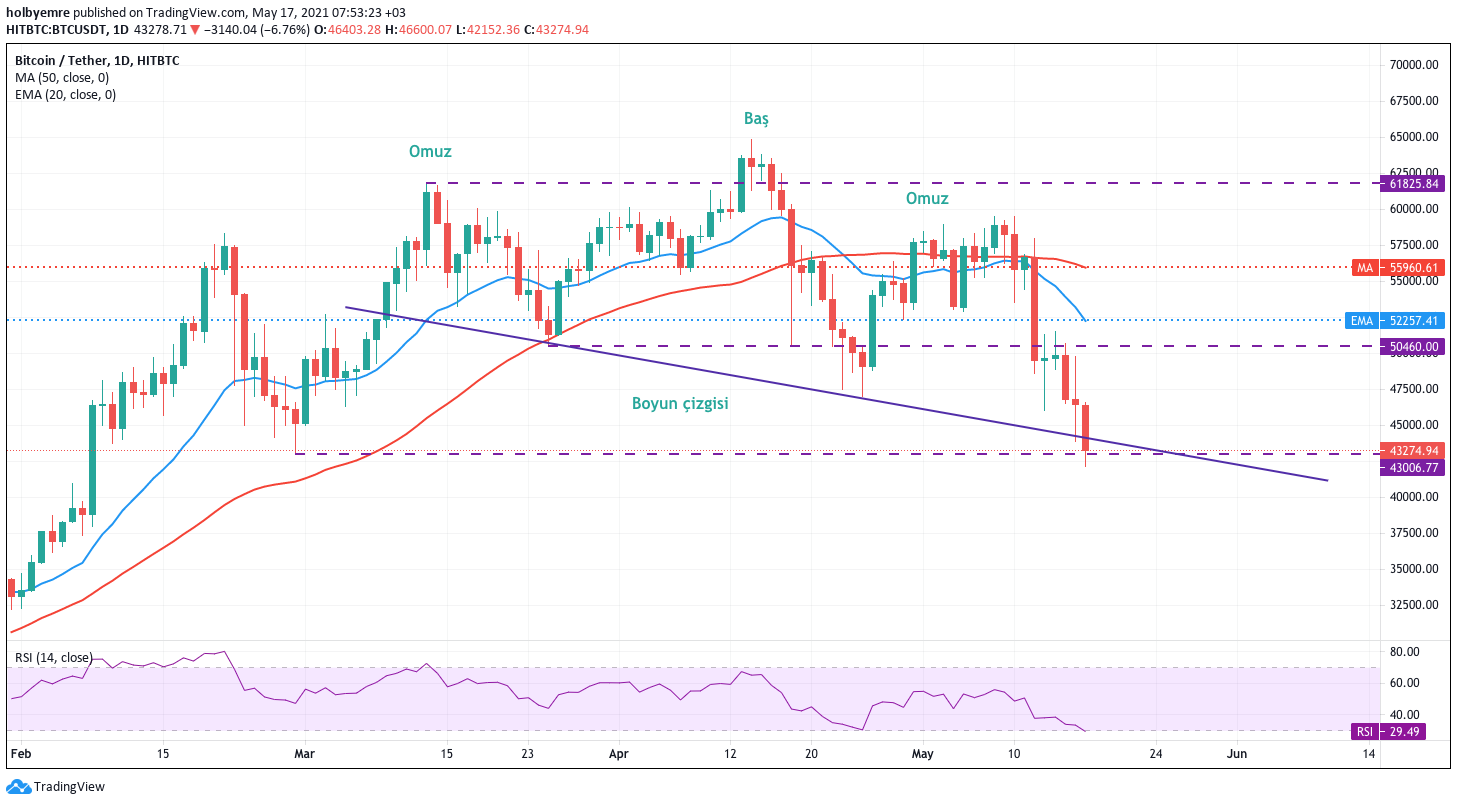 The pressure of the bears is increasing and there has been a decline below the neckline shown on the chart. In other words, the head and shoulders shoulder model that has been observed for a while has been completed. After closing below the neckline, technically, there is a possibility of a decline of up to $ 31,653.73.

The 20-day exponential moving average ($ 52,257) and the relative strength index (RSI) falling to 29 levels, which is turning its direction down, now show that the bears are at the wheel.

Contrary to this assumption, if the price rises from the current level and moves above $ 50,460, the BTC / USDT pair could rise to the 20-EMA. A break above the $ 60,000 psychological resistance and the next closing there reveals that the bulls are starting to have a say in the market again.

XRP price is currently trading within a symmetrical triangle, which often acts as a continuation pattern. If the bulls can push the price above the triangle’s resistance line, the altcoin could retest $ 1.96, the 52-week high. 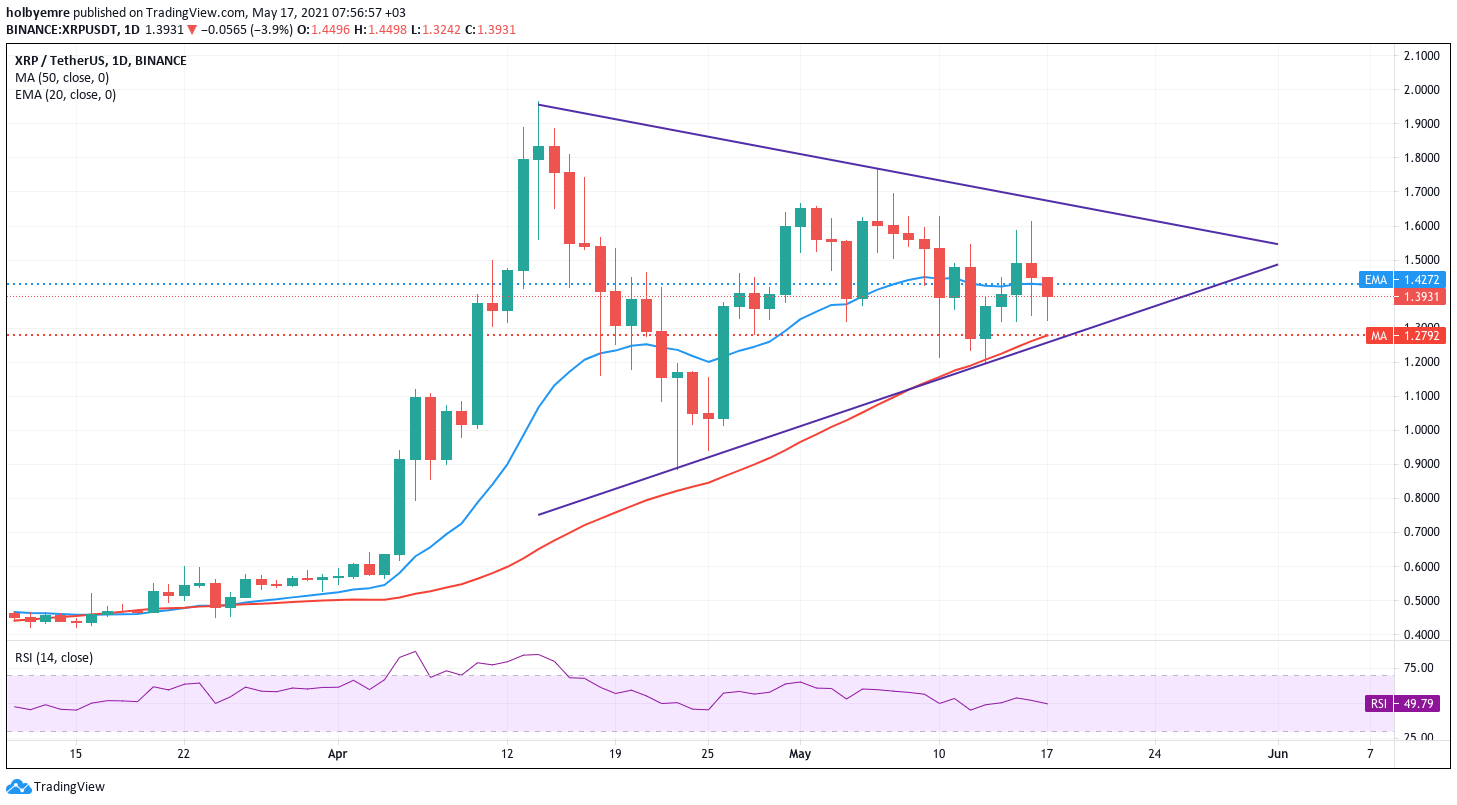 A break above $ 1.96 and a future close there could start the next leg of the uptrend that could push the price to $ 2.68. The relative strength index (RSI) is in the positive zone boundary, but the 20-day exponential moving average (EMA) ($ 1.42) has not moved up yet. This indicates that the bears will defend the resistance line aggressively.

As long as the price remains close to the resistance line of the triangle, the expectation for an increase in XRP / USDT will always be pushed forward. If the bears prevail and the price triangle remains gold, the trend may change in the downward direction. Such a move could pull the price down to $ 0.88.

The Polkadot (DOT) price had a short-term upward move and as of May 14, it was above the overall resistance at $ 44. As the bulls increased purchases, the price hit an all-time high of $ 49.78 on May 15. However, at higher levels, interest decreased and profit purchases were seen. The price dropped as low as $ 35. 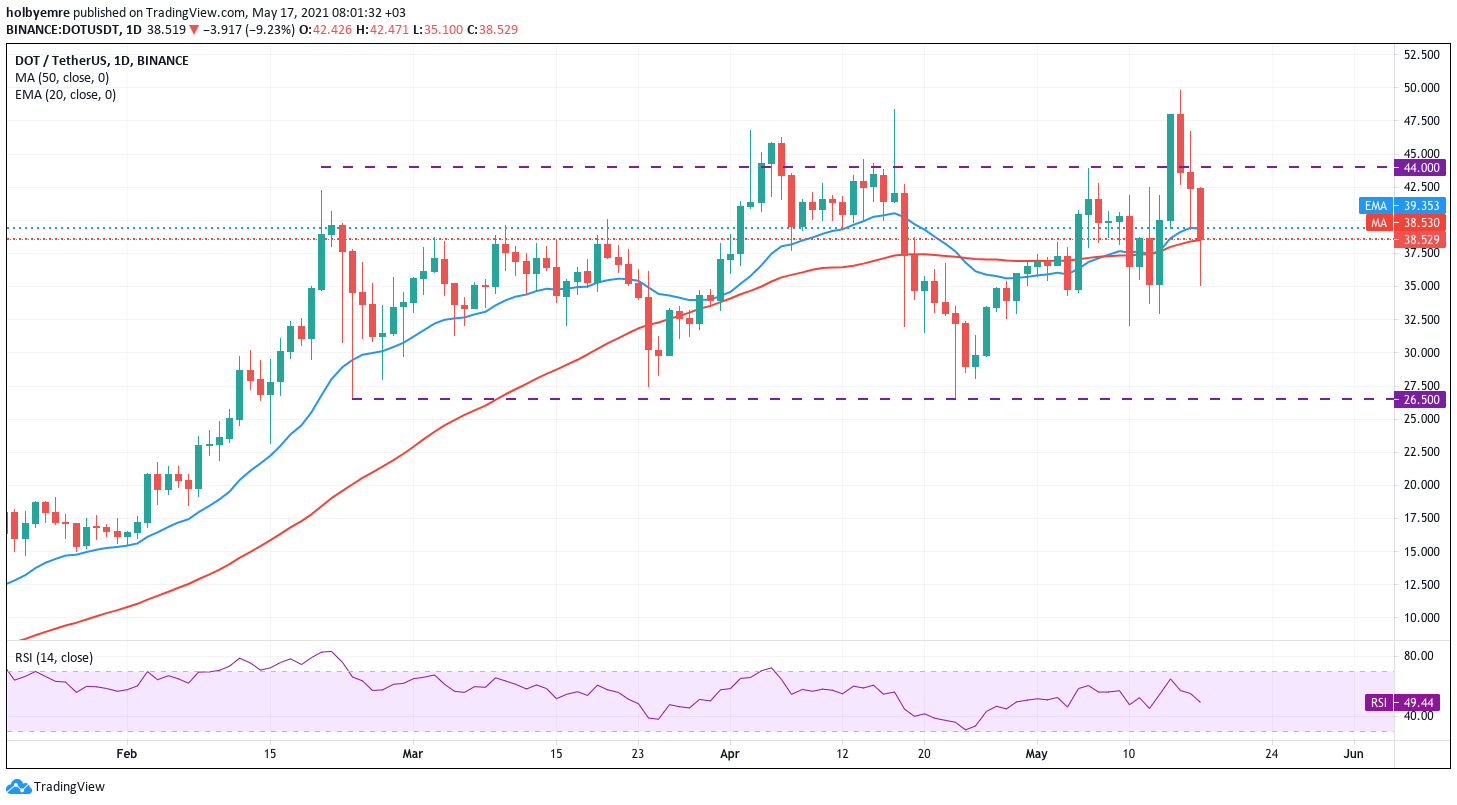 The long tail on the day’s candlestick indicates that the bulls are not giving up at the current levels and are continuing to buy. If they do not give up, an increase may come again. For a while, a move near the $ 44 resistance and then breaking this resistance once again will bring the move towards $ 50 new psychological resistance for the DOT / USDT pair.

In such a case, the pair can start the next leg of the uptrend and move up to $ 63.68. The 20-day exponential moving average (EMA) ($ 39.35) rising close to the horizontal and the relative strength index (RSI) in the positive zone increase the likelihood of an upward move.

Contrary to this assumption, if the price gets a few more closes below $ 44 and stays below the moving averages (MA), the closest $ 32.5 support will be tested.

Stellar Lumens (XLM) is trying to start a new uptrend. The bulls increased purchases in a decline below the 20-day exponential moving average (EMA) ($ 0.61) on May 13. The price subsequently climbed to a one-year high at $ 0.79. However, the long wick candlestick on May 16 indicates that higher profit taking is getting more frequent. 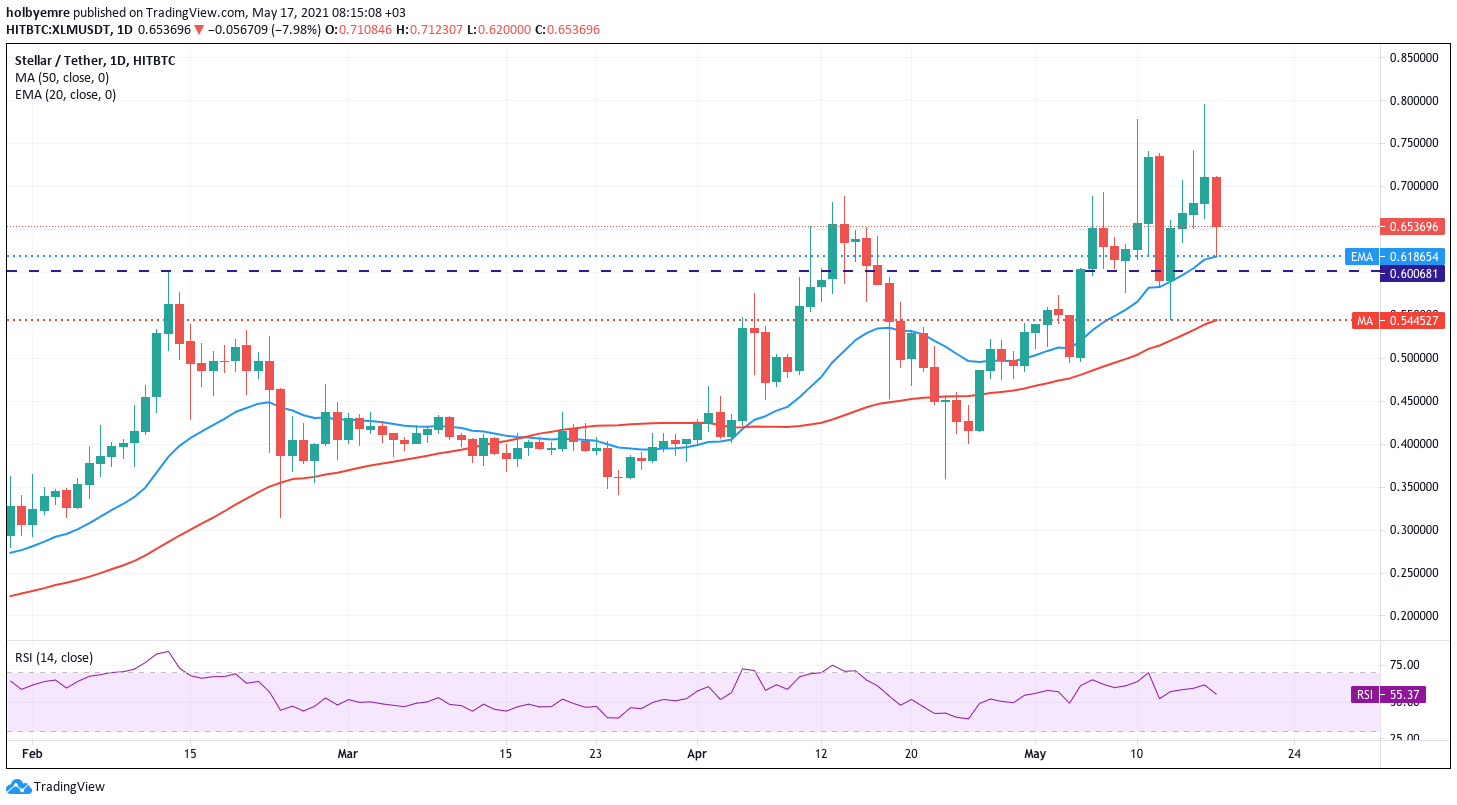 If buyers can keep the price above $ 0.73, the XLM / USDT pair could rise to $ 0.85 and then to $ 1. The upward-sloping moving averages and the relative strength index (RSI) above 55 say the bulls have the upper hand.

Contrary to this assumption, if the price stays below $ 0.73, the pair could drop below the 20-EMA as well. A strong recovery from around this support will show that the market sentiment remains positive. The bulls will then make another attempt to continue the uptrend.

The price closing below 20-EMA invalidates the positive view. Such a move will show that traders are quickly closing their positions and abandoning purchases in dips. In this case, a regression to the 50-day simple moving average (SMA) ($ 0.54) can be observed.

Solana (SOL) price has been moving in the range of $ 40 to $ 49.99 for the past few days. Increasing consolidation within the range is a positive sign as it shows that traders are not in a hurry to take profits. 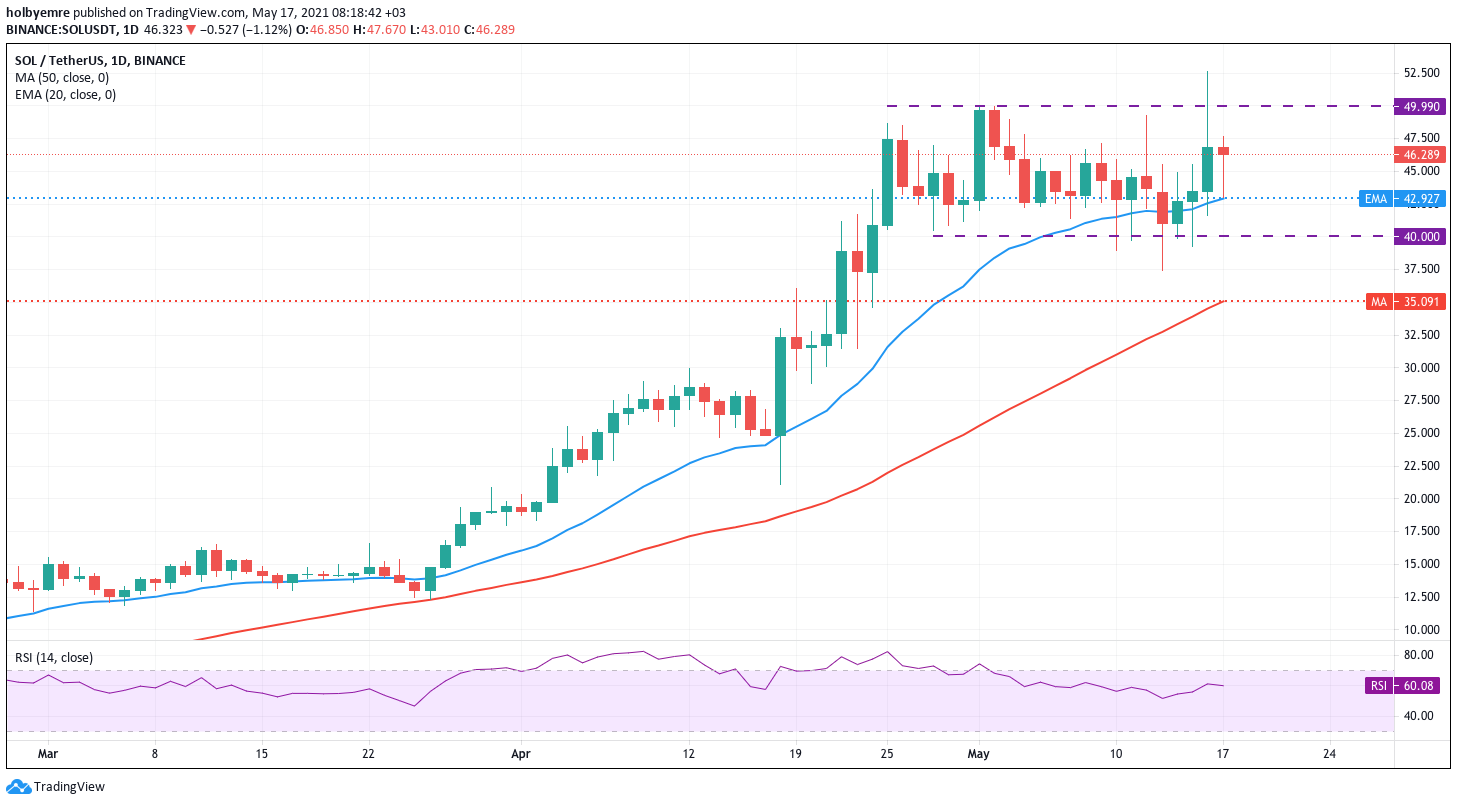 The 20-day exponential moving average (EMA) ($ 42.92) is rising and the relative strength index (RSI) is above 60. So the probability of an upward movement is higher.

If the bulls manage to keep the price above the psychological resistance at $ 50, the SOL / USDT pair may continue its uptrend. The next target on the upside will be $ 60 and then $ 69.

On the other hand, if the price does not stay above $ 50, the course may continue in the range and the consolidation could be extended for a few more days. If the pair drops below $ 40, the positive views will become void.

Share
Previous According to the famous analyst commenting on the Bitcoin price, $ 43,000 is “reasonable”
Next DeFi sector rise and fall – NMR – XVS