After the update, the Telcoin (TEL) price increased by 862%!

According to Cointelegraph Markets and TradingView data, the TEL price recorded as $ 0,00075 on Feb. 1, while it peaked at $ 0.04900 as of May 6. During this period, the increase in the value of the crypto currency was calculated as 6.433 percent.

Telcoin, which announced a money transfer service between the Philippines and Canada for the first time in February, attracted great interest. With the update, the use of the network exploded when the application, which runs on smartphones with both iOS and Android operating systems, was shared on the Apple Store and Google Play.

Of the Telcoin team to testimony According to the money transfer service, which first started in Canada, it will soon be available for Singapore, Australia and the USA.

TEL, which was overhauled as a Layer-2 solution on the Ethereum network, was listed on QuickSwap, a decentralized exchange (DEX) running on Polygon. Telcoin, which moved close to the horizontal in March and April and achieved a modest rise, took flight with the second layer solution.

TEL transaction volume has multiplied thanks to the low fees of the Polygon network and attractive return opportunities for QuickSwap liquidity providers.

Telcoin, which entered a rising process after the update on the blockchain network in February, started to climb with high acceleration especially after the second layer solution became active. The price increase of TEL / USDT parity only since April 25 was calculated as 862 percent. 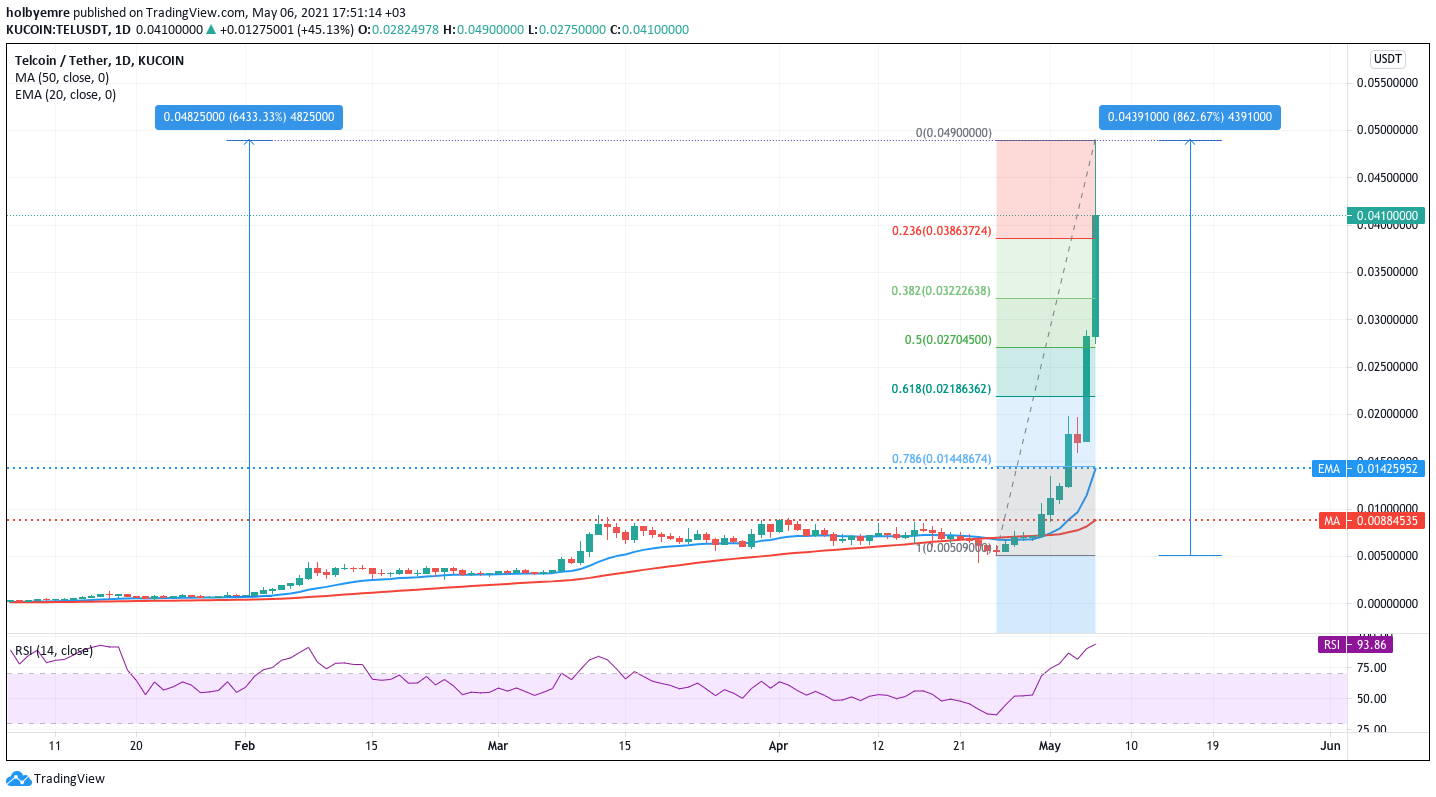 Moving averages (MA) turning upwards and the relative strength index (RSI) being at the top of the overbought level gives the bulls an advantage, but warns that a drastic correction may occur.

TEL, which was traded at $ 0.041 at the time of the news publication, witnesses profit gains as can be understood from the long wick candlestick formed after the sudden rise in the last 10 days.

Aiming for the continuation of the uptrend, the bulls will try to close above the 38.2% Fibonacci retracement level calculated at $ 0.032 as an initial target. If the price springs up after a fall to this level, the record value at $ 0.04391 can be tested.

On the other hand, if the price correction deepens, the 61.8% Fibonacci retracement level will become the strongest support for the uptrend. If there is an upward recovery after a regression towards this region, it may take some time for the uptrend to re-establish.

If none of the aforementioned supports work, the decline is likely to deepen to the 20-day exponential moving average (EMA) ($ 0.014). In such a case, the accelerated upward trend will come to an end.