The biggest altcoin Ether is continuing the rally that started at the end of April without slowing down. According to CoinMarketCap data, ETH, which gained about 10 percent in the last 24 hours, rose to an all-time high of $ 3,523.

The sudden rise of Ether has caught those who expect a drop in the price of the cryptocurrency by surprise. On-chain data and analysis source CryptoQuant, In his post dated May 4 He stated that a record number of short positions have been liquidated in the ETH futures market.

Short position refers to the type of investment in which futures traders, who foresee a decrease in the price of an asset, sell the asset by borrowing it and then plan to make a profit while paying off the debt as the asset’s price falls.

About: What are short and long positions?

However, Ether, on the contrary, has broken record after record in the last week. As a result, the largest amount of short positions ever seen in the futures market was liquidated. 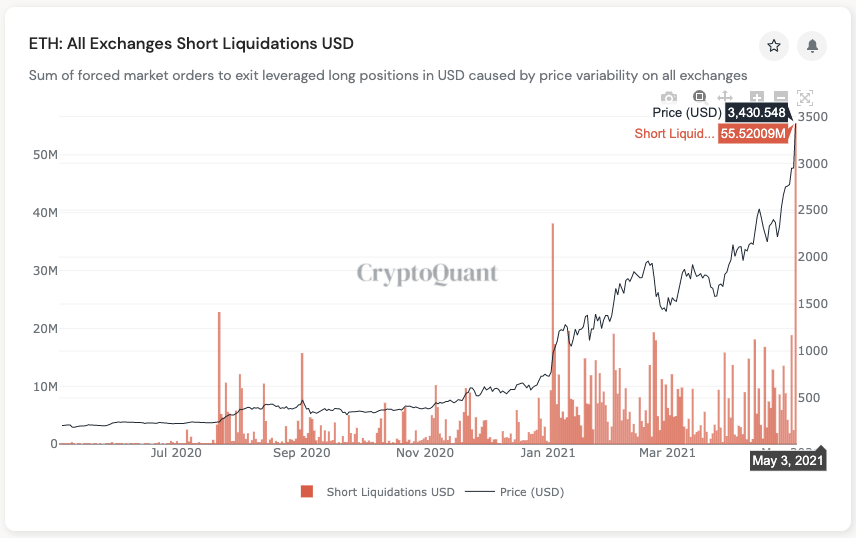 As seen in the chart above, the value of short positions liquidated in the last 24 hours in the ETH futures market was measured at an all-time high of $ 55.52 million. This situation caused a short position squeeze in the market.

Ether has increased 32 percent over the past seven days from $ 2,660 to $ 3,461 by news release time. Besides the short position squeeze, some other indicators also point out that this parabolic rally may continue.

The fact that the bitcoin price is consolidated as it is now often gives altcoins an upward opportunity. The decline of the market dominance of crypto currency below 50 percent is seen by investors as a signal for the beginning of the “altcoin season (collective rise in the altcoin market)”. BTC’s market dominance was measured at 45.6 percent as of the time of the news broadcast.

In the Ethereum options market, on Friday, May 7, the contract worth $ 470 million will expire. Due to the unpreparedness of those waiting for a fall, almost all put options will be worthless if the biggest altcoin holds above $ 3,100 by Friday. It is thought that the realization of this situation may also trigger the increase in the price of Ether.

About: What is a Bitcoin option? How do option contracts work?