6 altcoins in silence before the storm under the lens

Claims have been made that if the price of Bitcoin (BTC) does not rise above $ 60,000 within a few days, it may “weaken for a few months.”

On the other hand, in an interview with CNBC on April 20, Scott Minerd, chief investment officer of the Guggenheim, spoke of the correction risk that Bitcoin would fall to the level of $ 20,000 to $ 30,000.

While these claims are made about the biggest cryptocurrency, there are 6 altcoins that are in the top 10 in terms of market value, but wonder whether they will make a similar increase in the price of Ethereum (ETH) during the day. Cointelegraph analyst Rakesh Upadhyay conducted technical analysis and price evaluation for 6 prominent altcoins.

Buying increased on April 19 when the Binance Coin (BNB) price dropped below the 20-day exponential moving average (EMA) ($ 482) on April 18. On April 20, the momentum increased even more, and a process began in which the bulls were trying to push the price up. The all-time high of $ 638.56 is currently the strongest target of the bulls. 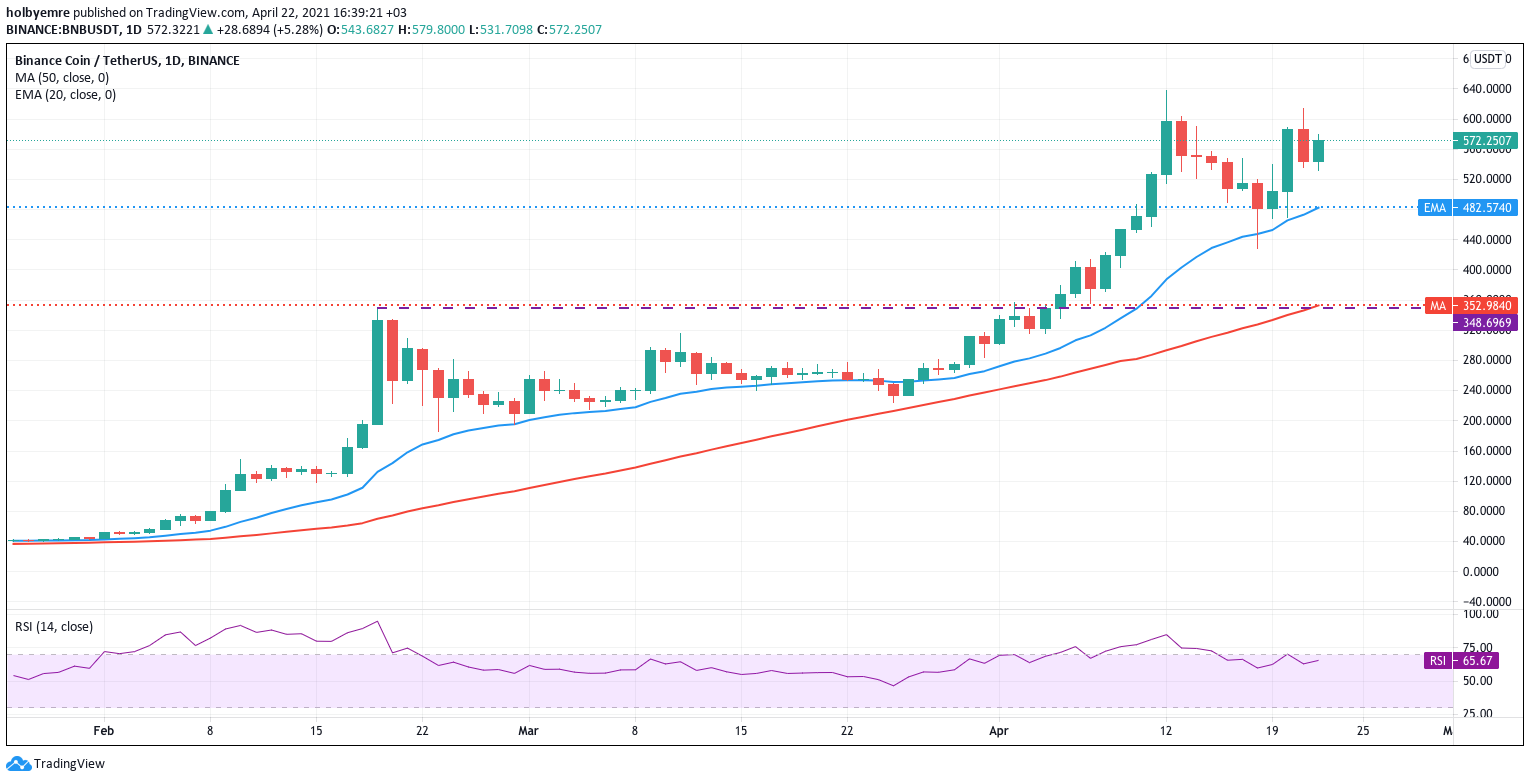 If the bulls succeed, the BNB / USDT pair will set the next target at $ 832. Rising moving averages (MA) and the relative strength index (RSI) near the overbought zone give more likely signals for upward movement.

However, bears are not able to give up easily. They will form a hard resistance between $ 600 and $ 638.56. If the bulls maintain their strong stance on April 20, the possibility of a break in the resistance zone will increase.

On the other hand, if the price drops below $ 520, the bears can make another attempt to break the 20-EMA. A break below $ 428 could initiate a deeper correction.

The bulls are aggressively trying to defend the 20-day exponential moving average (EMA) ($ 1.25). The fact that this support has not been broken yet clearly shows that the positive sentiment continues on XRP. Gradually rising moving averages (MA) and the relative strength index (RSI) in the positive zone give the bulls an advantage. 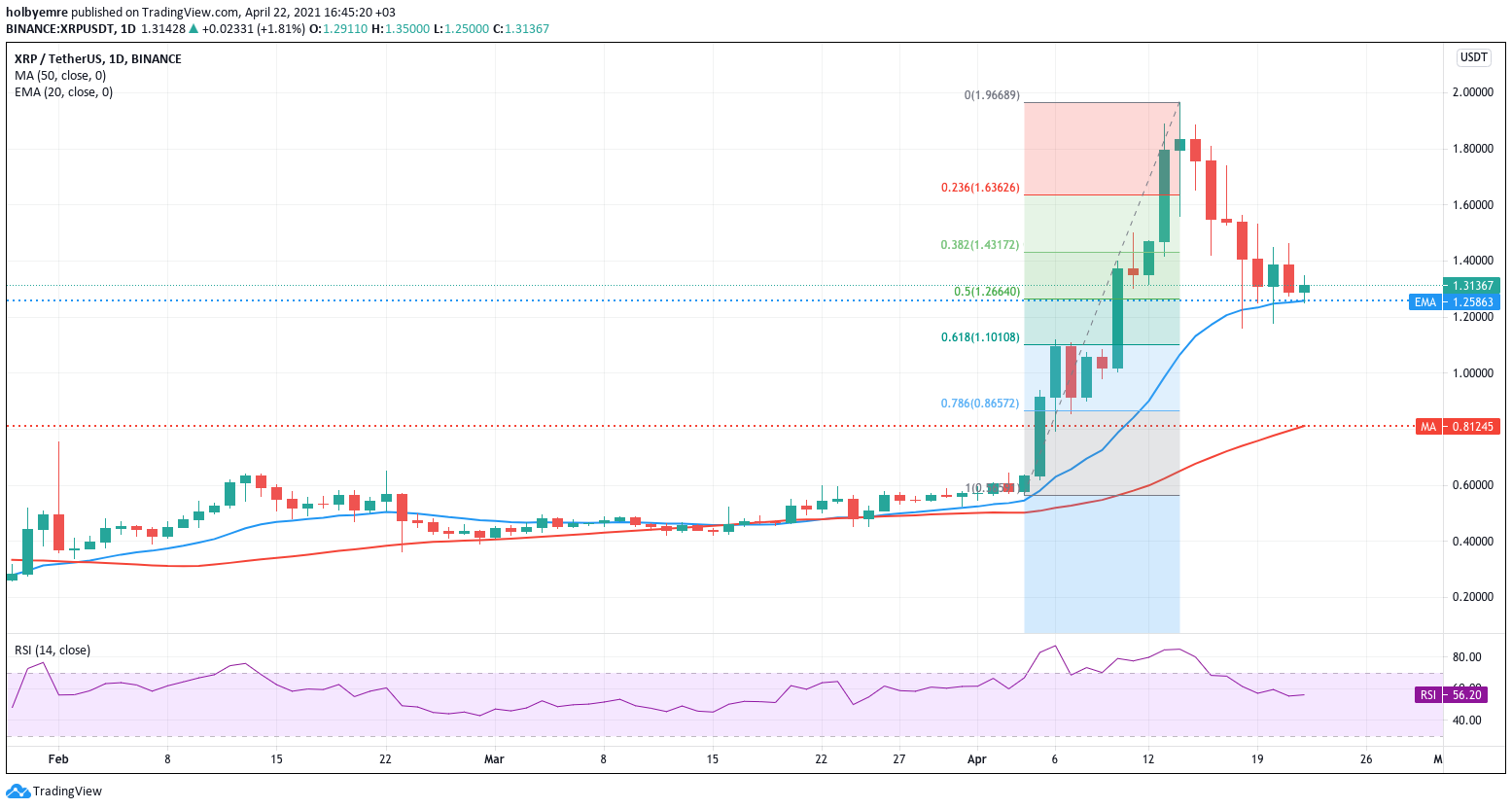 In the first place, the XRP / USDT pair could rise to $ 1.56, where the bears are likely to show strong resistance. If the price breaks back from this resistance, the price could drop rapidly below the 20-EMA.

If the bears succeed, the drop could extend to $ 1.10 where the 61.8% Fibonacci retracement level is calculated. Conversely, if the $ 1.56 resistance is breached, it will show that the bulls are in control of the market again.

Flaming the price of Dogecoin (DOGE), the bulls tried to maintain the uptrend on April 19, but failed to surpass the all-time high of $ 0.45. The price fell sharply from $ 0.43 as traders took profit. 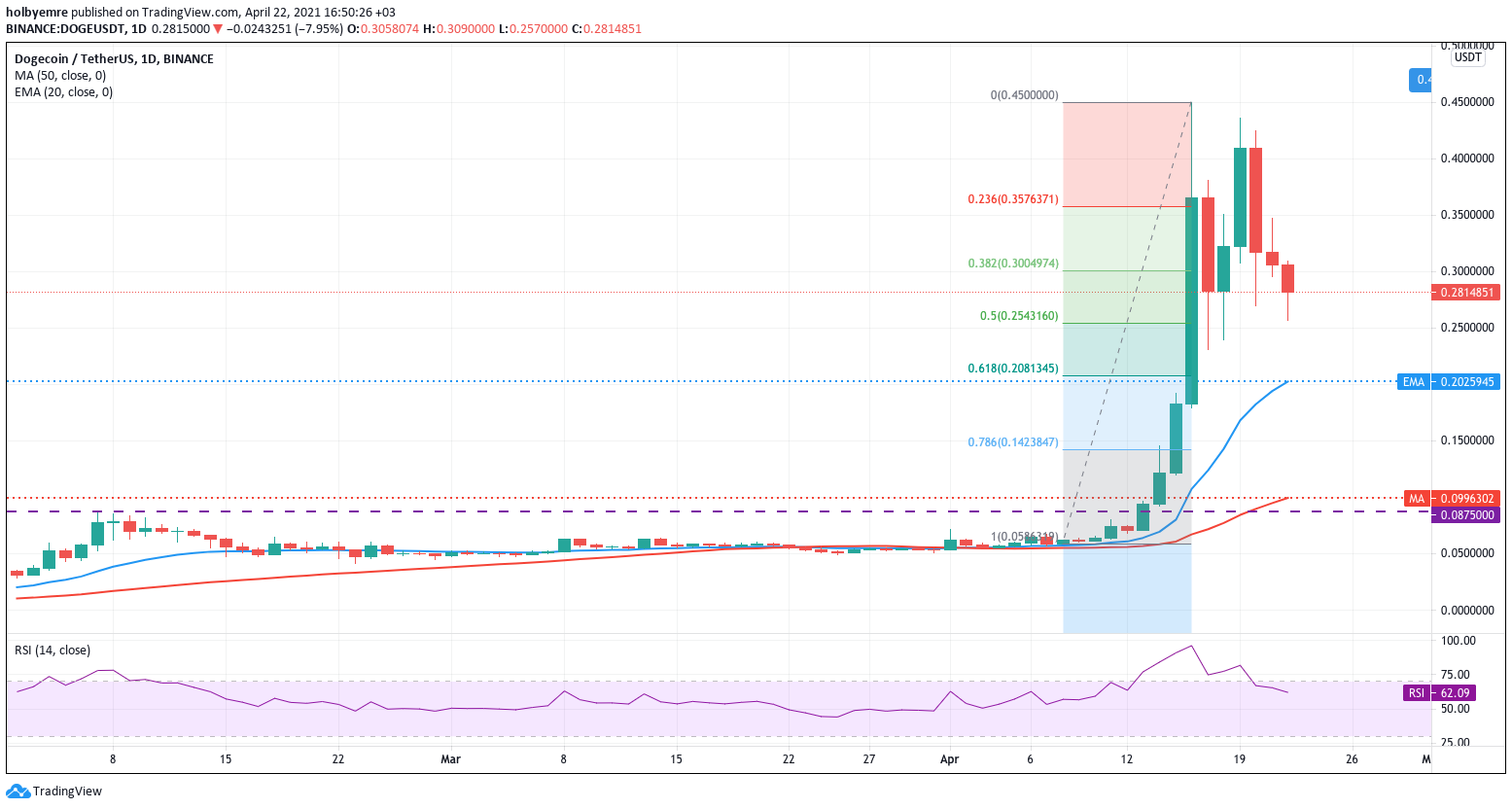 The DOGE / USDT pair formed a candlestick pattern as of April 21, suggesting indecision between the bulls and bears. While the initial support level appears at $ 0.27, a future close below this zone could bring the pair down to the 20-day exponential moving average (EMA) ($ 0.20).

An upward recovery from the 20-EMA level will indicate that the bulls are continuing to buy at lower lows. However, even if the uptrend starts after such a deep correction, it will take time to reach record levels.

On the other hand, if the closing below the 20-EMA comes, traders who buy at higher levels can intensify the sales at the expense of losses. The price could then drop to the 78.6% Fibonacci retracement level calculated at $ 0.14.

Cardano (ADA) price fell below the 50-day simple moving average (SMA) ($ 1.20) on April 20, but the bulls are in a rapid recovery. This indicates that the bulls continue to buy from lows. If buyers push the price above the 20-day exponential moving average (EMA) ($ 1.26) and close here, a rise to $ 1.48 is possible. 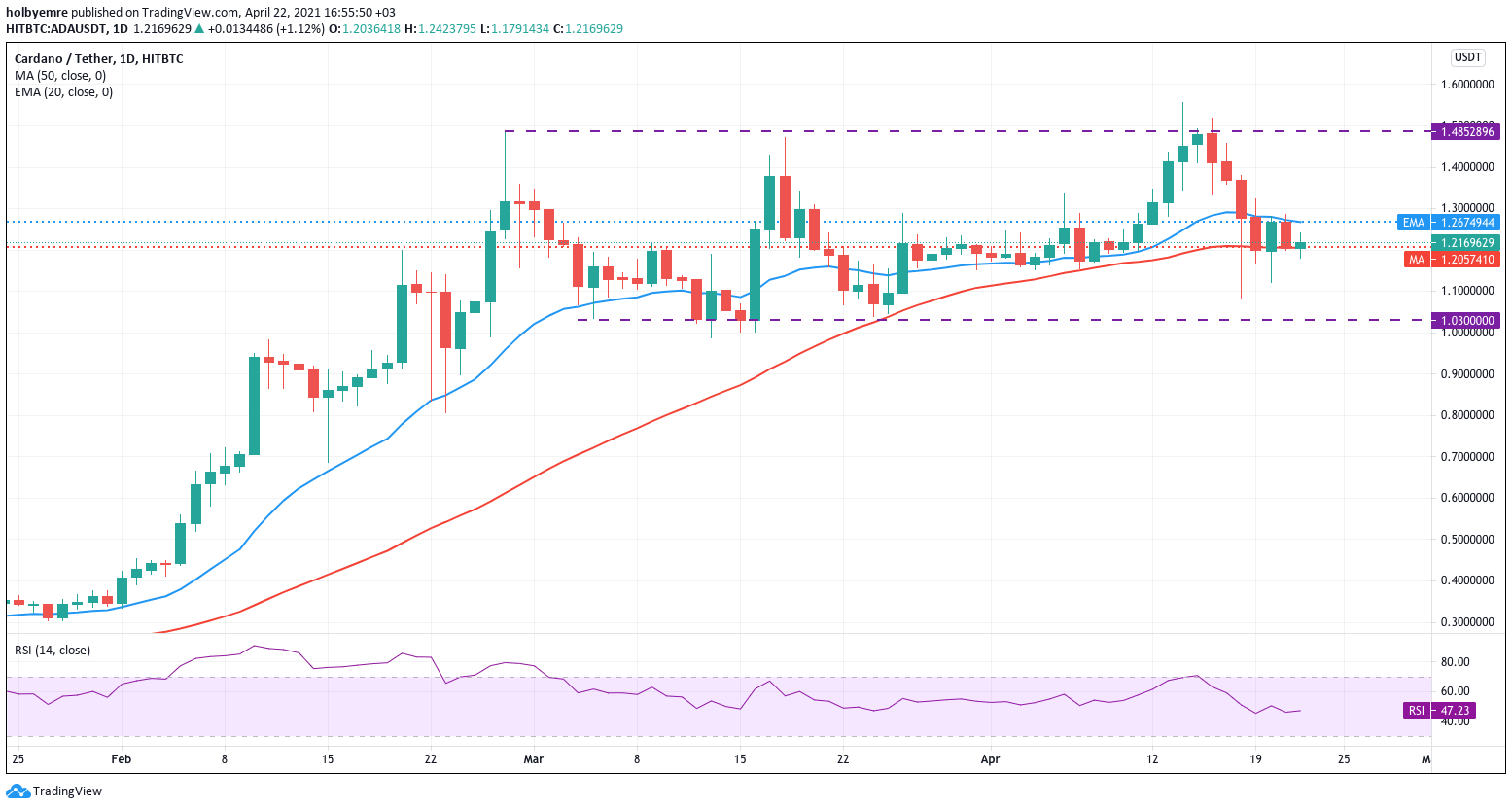 The rolling moving averages (MA) and the relative strength index (RSI) near the midpoint indicate that the pair could move from $ 1.03 to $ 1.48 for a few more days.

If the bulls push the price above the $ 1.48 resistance or the bears break the pair below the $ 1.03 support, it will be possible to talk about the new trend action.

Polkadot (DOT) price jumped up from $ 31.55 on April 20, but buyers could not maintain this level. In other words, there is hesitation to buy at high levels. 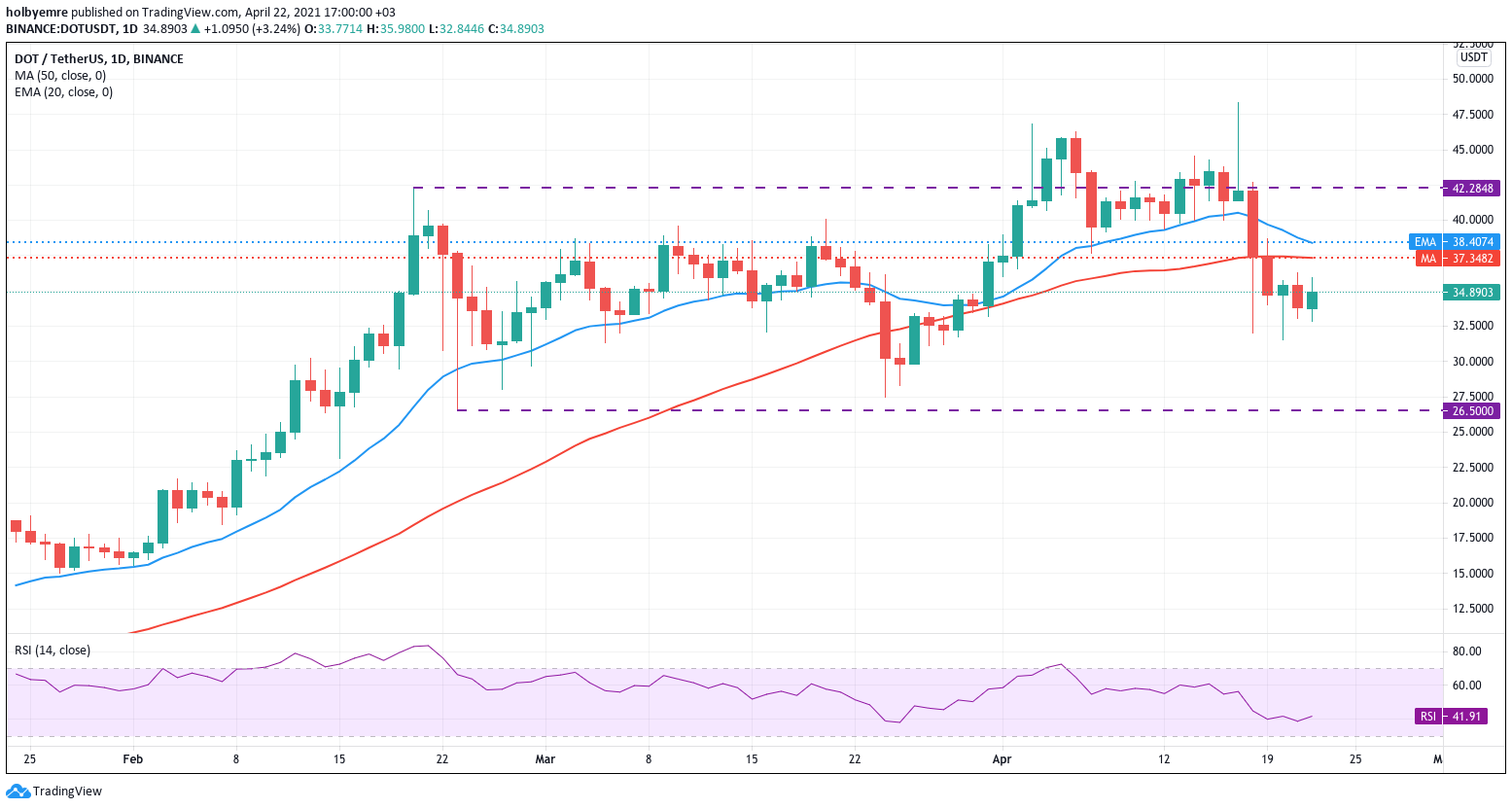 The declining 20-day exponential moving average (EMA) ($ 38.40) and the relative strength index (RSI) in the negative zone now show that bears are at the wheel. If the price falls below the moving averages, it will be revealed that traders have increased sales during the rallies.

On the other hand, this negative view will become invalid if the bulls push the price above the moving averages. Such a move could enable the rally to continue to $ 42.28 and then to an all-time high of $ 48.36.

Long tails on candlesticks three times in a row indicate that the bulls are strongly accumulating lows. Following these signals, purchases gained momentum on April 21 and 22. The bulls are trying to keep the Uniswap (UNI) price above the $ 35.20 resistance. 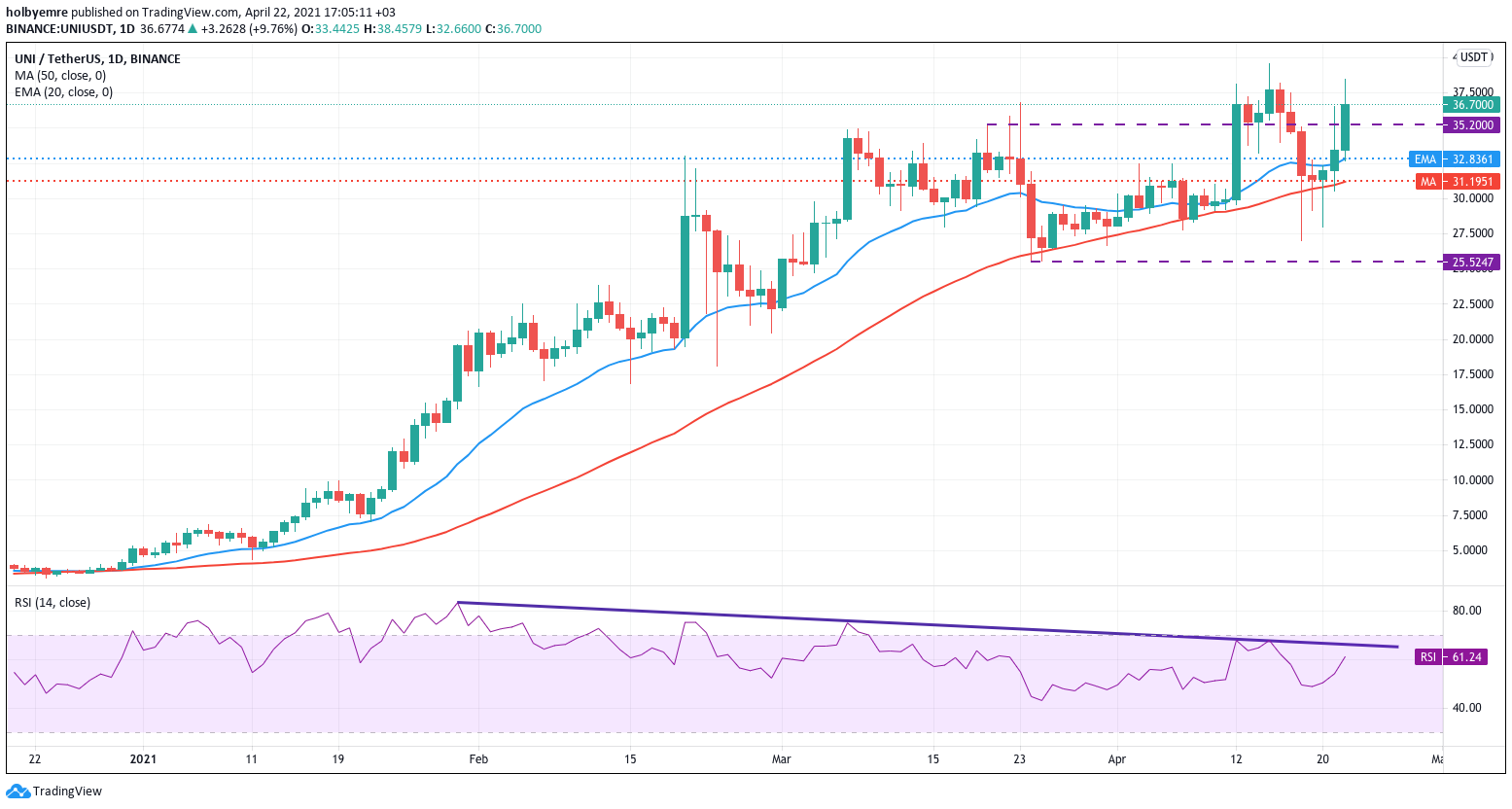 If they manage to do so, the UNI / USDT pair could retest the all-time high at $ 39.60. Breaking this resistance could enable the beginning of the next leg of the uptrend. It could then rise up to $ 44.88 and $ 50 first.

On the downside, if the price drops from the current level and falls below the 20-EMA, the above positive view will become invalid. Such a move will keep the pair in lane for a few more days.