Dogecoin (DOGE) may be the most talked about cryptocurrency of recent days, but there are also remarkable movements in the rest of the market.

In particular, three altcoins stand out with their recent price movements. Cointelegraph analyst Rakesh Upadhyay shared a price assessment for Horizen (ZEN), Hedget (HGET) and Zcash (ZEC), which he scrutinized. 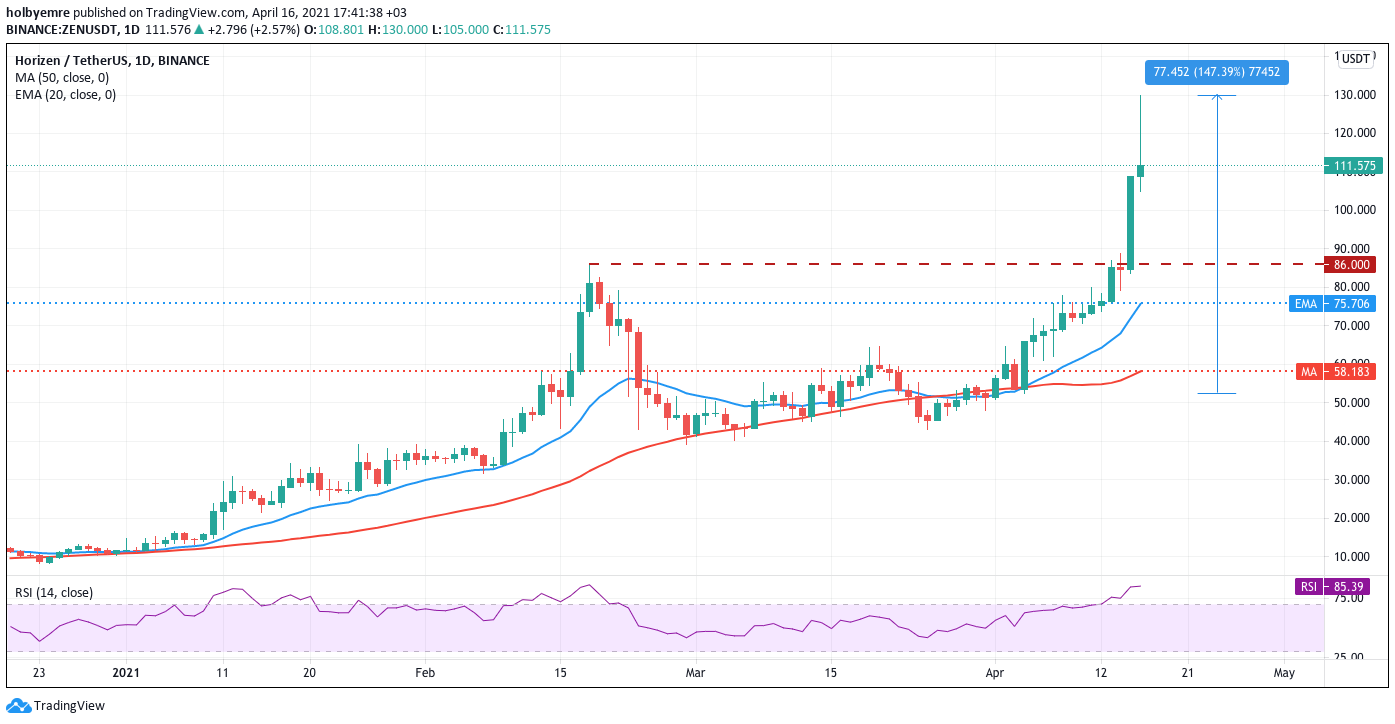 The sharp rise over the past few days has pushed the relative strength index (RSI) above 85, indicating that the ZEN / USDT pair is facing overbought in the near term. This may cause a minor correction or consolidation over the next few days.

If the bulls can move the $ 86 level to support during a possible correction, it will turn out that the trend remains positive and traders are buying on dips. The bulls can then make another attempt to continue the uptrend.

On the other hand, if the bears pull the price below $ 86, this positive view will become invalid. This time the pair could drop to the 20-day exponential moving average (EMA) ($ 75,706). A break below this support will mark the beginning of a deeper correction.

HGET has been in the correction phase for the past few days. After hitting an all-time high of $ 10.95 on 31 March, it declined to $ 8.51 on April 11 and a 22.28 percent correction in 12 days. Adjustments made to strong support levels during an uptrend often create a low-risk buying opportunity. 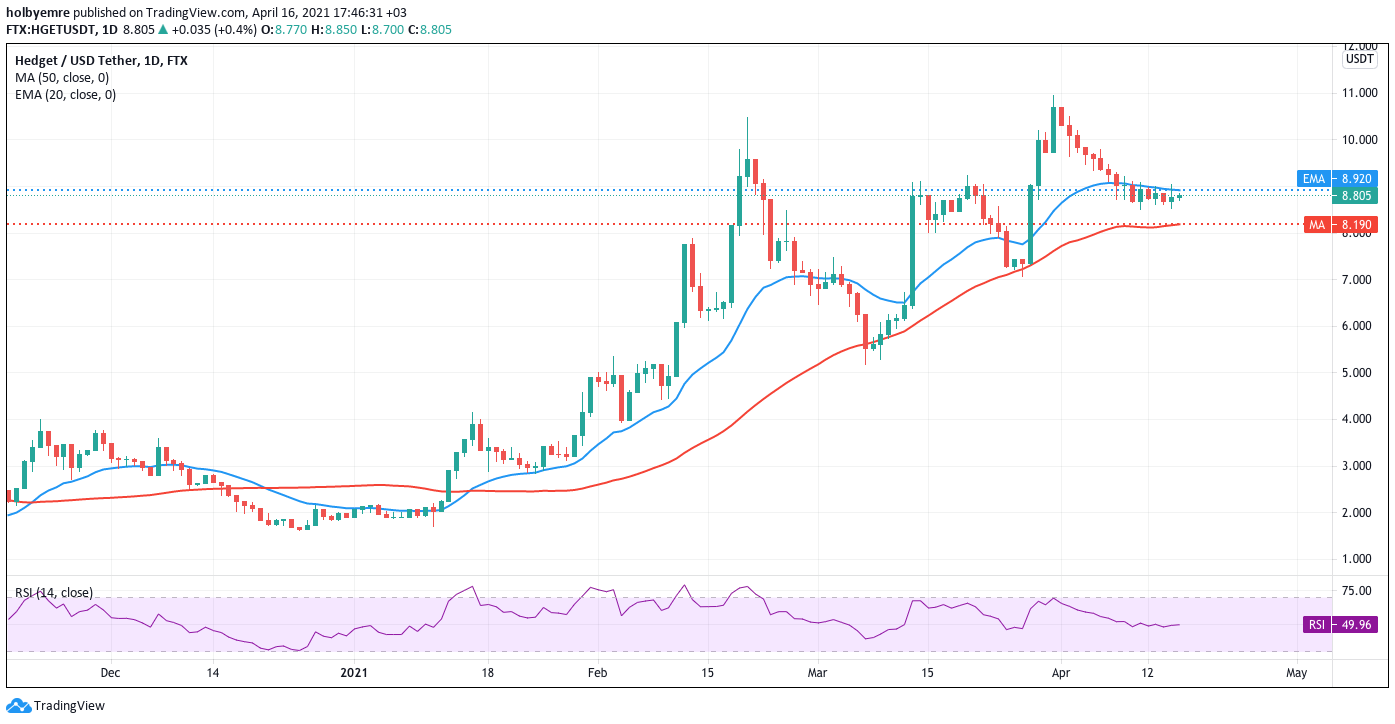 The HGET / USDT pair has received support twice in recent weeks at the 50-day simple moving average (SMA) ($ 8.19). This indicates that the bulls were buying aggressively during the dips towards the 50-SMA level.

The pair has been trading just below the 20-day exponential moving average (EMA) ($ 8.92) for the past few days. However, the bears were unable to exploit this weakness and achieve a decline below the 50-SMA. This indicates that there is not enough sales at low levels.

Both moving averages are flat. The relative strength index (RSI) is just below the midpoint. So there is a balance between supply and demand.

This balance is unlikely to continue for long. If the bulls can push the price above the 20-EMA, the pair could retest the all-time high. Breaking this resistance could start the next leg of the uptrend, rallying up to $ 12.39 and then $ 15.

The bullish outlook will become invalid if the price breaks below the 50-SMA. Such a move can pull the price up to $ 7 and then up to $ 5.18.

ZEC price is in a strong upward trend. There has been an increase to $ 267.74 since the intraday low of $ 162.52 was seen on April 7. So the pair increased by 64 percent in 10 days. The sharp rise in the past few days has moved the relative strength index (RSI) into the overbought territory. This increased the likelihood of a minor correction or consolidation, as a red candle had formed as of April 16. 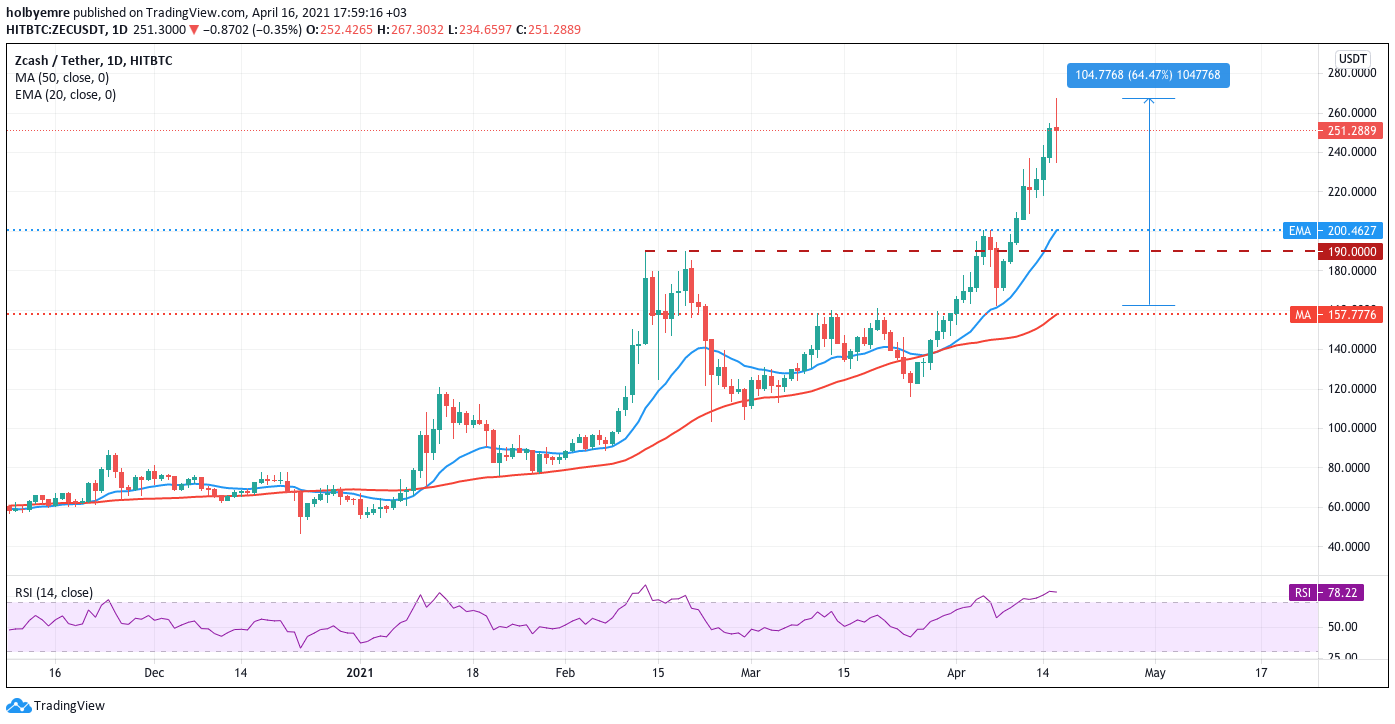 In the event of a decline, the first major support can be expected to be seen at the 20-day exponential moving average (EMA) ($ 200). The bulls advocate this support in the current rally, as evidenced by the strong jump on April 8.

If the ZEC / USDT pair drops to the 20-EMA and bounces up from there, the bulls will try to continue the uptrend. If they are successful, the pair could begin its journey towards $ 350.

Contrary to this assumption, if the bears pull the price below the 20-EMA and also below the $ 190 support, which recently turned from resistance to support, a retracement to the 50-day simple moving average (SMA) ($ 157) may come. Then a deep correction up to $ 120 will be on the table.