The period of earnings reports is approaching, and considering how much the stocks have risen in the last few weeks, it could be important for the general stock market. It has gained close to 8% in an almost straight line since 25 March. Partially, it can be said that behind this upward movement is the expectation that the earnings reporting period will be strong.

Expectations Have Declined Over Time

Historically, it’s not uncommon for earnings estimates to constantly rise. In fact, the increases that started in earnings expectations since 2010 often declined over time. This was because the expectations of analysts and investors were often very high. This time, the situation may be different with the reopening of the economy, but it should be considered whether a similar situation will occur in 2022 or even in 2023. 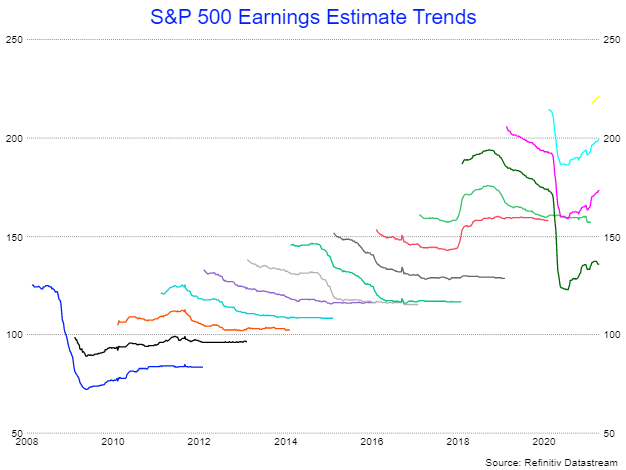 As we exit the 2008-2009 recession, the years 2010 and 2011 may be the best comparable period to the gains we are currently experiencing. Earnings estimates in these two years started low and then went up. However, from 2012 to 2016, the opposite happened; Although the forecasts started high, it ended the year at much lower levels.

One of the recent exceptions can be shown in 2018, where earnings forecasts have risen, staying at these high levels, with the reduction of corporate taxes and the recovery of the US economy. However, this was a one-time anomaly because it closed the year at low levels, even though forecasts started high in 2019, similar to most of the decade.

While earnings forecasts have reached extremely high levels for this and next year, they are still far lower than what investors originally hoped for. Before the epidemic, analysts’ estimates of 2021 earnings were $ 205 per share, while their 2022 earnings estimates were above $ 214 per share. In other words, although the forecasts have dropped significantly compared to a point before the epidemic, the same predictions are now on the rise once again.

However, the higher the earnings estimates, the bigger the prospects. So there will be constant pressure to keep earnings better than expected, for forecasts to reach even higher levels. Considering the S&P 500 currently trades at 20.7x the one-year earnings estimates, this year could be even more critical. The S&P 500 is trading at the highest price-to-earnings ratio since the late 1900s. In other words, there is almost no room for error in the current period.

Therefore, these first quarter results may be more critical than in the past, especially if investors are hoping that the bullish momentum in the stock market will not disappear suddenly.