Can We Say “Dollarization” is Over for the Sales in the Last Week?

When we look at the week before the CBRT President change (March 19);

When we look at the week of March 26, which shows the week in which the CBRT President was dismissed;

What does this mean?

The exit in just one week is more than the entries in about 3 months, so all foreign entries at the beginning of the year are gone.

Let’s talk to the residents;

We have stated that the decrease in foreign currency deposit accounts may be the sale of profits. It has decreased by 8.9 billion dollars in the last week. Although some read this as the reverse dollarization started, we attribute this record decrease to the rapid rise in exchange rates. Because;

As the exchange rate declined after November, foreign exchange purchases continued, and there were high-level buyers who also waited, and when the exchange rate peaked after November, some took their profits, some closed the scissors because they bought the high level, some broke it to pay debt, etc. Therefore, neither the change in the last week nor the outlook in the last 4 months indicate that reverse substitution has begun.

As the figures show, as the uncertainty increases, the TL also loses value, and this has happened many times in recent years. In March, we witnessed another repetition. From now on, inflation will be followed first, and then the policy of the center against high inflation, but foreign outflow may continue, albeit to a lesser extent, in this process. For the residents, we think that the decrease in the exchange rate will be considered as a purchase.

In order for the interest to be attractive;

In the eyes of foreigners, only high interest rates are not enough, an atmosphere of trust and reasonable volatility are essential. Having such activity in all pricing from swap to stock exchange in a day, from CDS to exchange rate, increases the risk.

In the locals’ eyes, interest is high, but inflation is also high, and when calculating, the return on deposits is almost nonexistent, it is on par. On the exchange rate side, the decrease remains limited and the increase continues. And yet, nobody can say a word about using his preference in this direction to protect his savings, right?

The volatility created by internal factors has given way to global pricing yesterday and today. and on the rise, the exchange rate tries 8.0 gold. However, purchases may remain weak at the lowest level of the banking index in 6 months and without foreign support. For this reason, the movement in the stock market, which cannot receive bank support, may be limited. 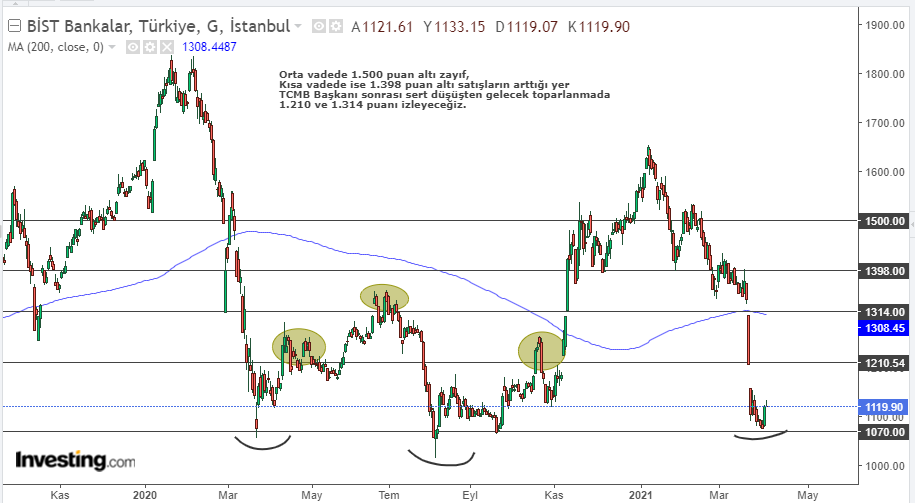 Share
Previous Covidien-19 increased mobility in Turkey, GameStop earnings – what’s going on in the market? By Investing.com
Next 3 developments in altcoins this week