While the US Treasury bond interest rate, which dropped below 1.7% on Friday and rose again on Monday, is still fluctuating around this level, investors are still undecided about what to do with Treasury bonds. 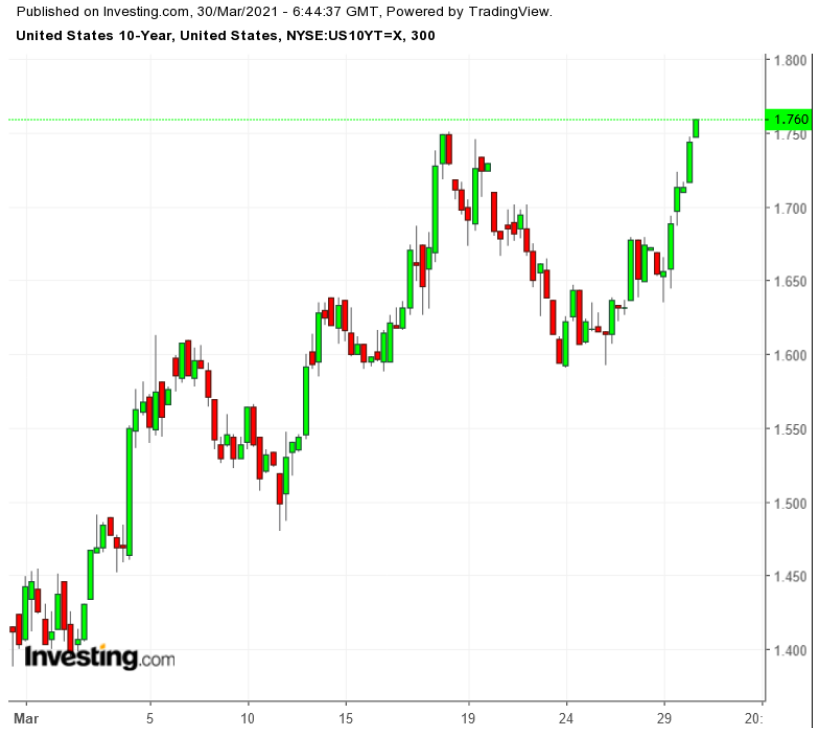 US 10-Year Treasury Bond Interest 300-minute Chart
FED members made a communication last week, assuring that flour is not a serious concern and that loose monetary policy will continue in the foreseeable future.
However, Thursday’s demand for Treasury bonds was weak, perhaps reflecting investors’ concerns over prices, despite the FED’s assurance. The issuance of $ 62 billion has a bid-to-cover ratio of 2.23, although it offers an interest of 1.3%, 10 basis points higher than February and twice the rate at the end of 2020. ) had.
Although the Labor Department’s March report will be released on Friday and the bond markets will close at noon before Easter, a higher-than-expected figure in employment growth could trigger a sale in Treasury bonds.

The consensus estimate is that around 630,000 new jobs will be created, much higher than the 379,000 expected in February. A high increase in employment will strengthen expectations for a rapidly recovering economy that brings risks to inflation.

With the evacuation of the Ever Given freighter yesterday, the reopening of the Suez Canal relieved the upward pressure on prices. However, this incident has raised concerns over the fragility of supply chains, as the supply shortages in every product, from containers to silicon chips used in automobiles, put pressure on prices, along with the increase in demand.

Christopher Waller also defended the independence of the central bank in his first speech Monday as the newly approved member of the FED Board of Directors and insisted that the central bank does not keep interest rates low for the government to borrow cheaply.

The European Union faced a speed bump in the process of selling EU bonds worth 750 billion euros to aid member states, as the German Constitutional Court asked President Frank-Walter Steinmeier not to sign the law ratifying the EU plan until the petition to block the sale by EU opponents was examined.

This aid includes the first bonds issued on behalf of the United States, and German critics point out that such a step would lead to German taxpayers ultimately having to pay the debt of the embattled Southern European countries, seeing it as a slippery ground for debt consolidation. The European Commission is confident that a swift decision will be made in favor of the EU, and it thinks that the necessary approvals for the start of payments in the summer will be obtained from all 27 member states by July. 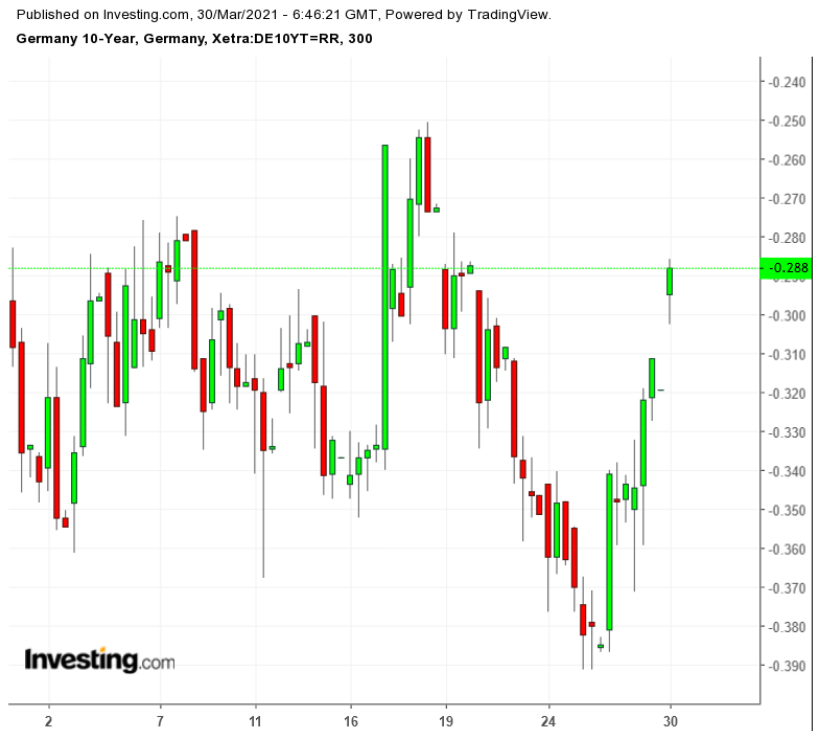 300-minute chart of the German 10-Year Treasury Bond Interest
Bond interest rose by 4 basis points to -0.311% on Monday, after a weekly survey in the Sunday edition of the German newspaper Bild showed that Angela Merkel’s Christian Democrats party was increasingly losing support due to scandals in the supply of COVID-19 vaccines and low levels of vaccination. rose.

Merkel’s legacy is also at risk, as she changed her position due to the reactions and had to impose stricter bans for the Easter weekend. However, Merkel continues to negotiate with state governments to prevent a third wave of cases.

The Green Party rose up to 23% in the poll, approaching 2% closer to Christian Democrats, who lost 11% in seven weeks. With the results of the survey, speculation about which of the Greens’ co-chairs will be the candidate for Prime Minister in the national elections to be held in September has also started.

Bond rates in Italy, another country suffering from slow vaccinations and an increase in the number of cases, are also shaking. The bond interest closed yesterday at 0.639%, after spending between 0.598% and 0.658%.
Share
Previous Risks to loan growth highlighted at last PPK meeting in Agbal period By Investing.com
Next Ethereum Protocol Developer Stated That NFTs Are Naturally Flawless »Coin Otağ