Ethereum, Cardano? Which could lead to better buying opportunities for traders? »Coin Otağ

The conflict between Ethereum and Cardano rocked Twitter last week. Since the Berlin update was announced, there is an expectation that the price of Ethereum will rise, but the opposite is observed with spot exchanges.

Low and mid-market altcoins such as DOT, ADA, LINK, FIL, THETA have made a comeback. Nowadays, the prices of these best altcoins have dropped just like Ethereum, but the 24-hour trading volume is increasing day by day.

Measurements for Ethereum in Q1 2021 (first quarter of the year) give a clear picture and provide a brief overview of Ethereum’s power on the chain. It was expected that Ethereum would return with an average of more than 586 thousand active addresses per day, an increase of 4.44 million in addresses with balance, $ 933.6 billion Ethereum traded on the chain and 96.67% YTD.

However, 3.986 Million ETH withdrew from exchanges this quarter. This may have formed the scarcity narrative, but it had no effect on price. The increasing volume showed that it meets the liquidity, this did not affect the price and ETH continues to decline as the post is being prepared. 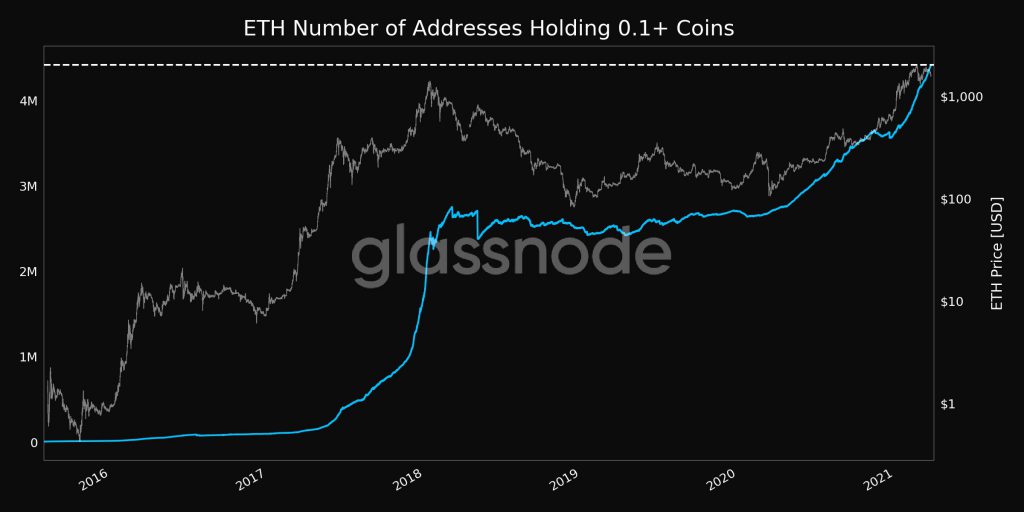 For Cardano, however, the asset’s market value has increased almost nine times since the last quarter. The market dominance was 2.17% and the current price is only about 23% away from ATH. Just like Ethereum, Cardano’s trading volume has increased by over 68% in the past 24 hours.

Cardano continues to decline, just like Ethereum. However, when it comes to Ethereum, price predictions and sentiment are currently trending neutral due to option (long, short) activity. At first glance, it may seem obvious that Ethereum is the winner, as 95% of HODLers in ETH are profitable versus 55% of Cardano.

What’s interesting about the Intheblock on-chain analysis is that the net network growth on the Cardano side is positive and relatively higher. On the ETH side, it may have reached saturation and loss of intensity due to delays in launching and rolling out updates. So much so that when we consider the comments of the strict followers of Coin Otağ analysis, we can think that the rising feels on the ETH sides sum up this situation well.

Derivatives trading activity has had an impact on the price of ETH, but when comparing two assets in a retail trader portfolio, the percentage of profit depends largely on the entry point and purchase price of each asset. While it is intuitive to assume that ETH has a stronger network influence, miners and community, so it wins this challenge; but this assumption may not be entirely correct.

Cardano is spreading updates faster than Ethereum and 55% HODLer, not all of them are spinning out of the Ethereum case at the current price level and naturally selling. Another way to win the war could be another alternative to balancing ETH and ADA in the portfolio, and retail traders can be seen using the dollar-cost average to reduce unrealized losses from ETH over time.

To be informed immediately of the most up-to-date developments Twitter Join our page!

In total, there are currently six products in the Sekuritance RegTech suite. These include Sekur.Vault, …