What is the Bitcoin stock flow model?

Coinbase to Propose Crypto Regulations to US Officials: Sources — CoinDesk

Perhaps the most important feature of Bitcoin that makes it valuable is its rarity. The model that tries to predict the price of the cryptocurrency by measuring this rarity is called the stock flow (S2F) model. The stock flow price model was developed by PlanB, the well-known analyst in the crypto industry.

Rarity means that an asset is difficult to obtain, scarce, and costly to produce. The rarity of an asset is generally regarded as a feature that increases the value of that asset. Similar to precious metals such as gold and silver, which are costly and scarce to mine, Bitcoin has a digital rarity. Bitcoin’s total supply is limited to 21 million, and 18.6 million of that supply has been put into circulation since the cryptocurrency’s emergence in 2009.

How was the stock flow model created?

Stock in the stock flow model refers to the current reserve of an asset, while flow refers to its annual production. Inventory flow, which is roughly represented by the stock / flow formula, calculates how many years an asset’s current total supply can be reached at the current production rate.

The stock flow model is based on the assumption that the rarity of an asset will increase its value. The model indicates that the rarer the asset and the lower the production rate, the more value that asset will gain over time.

Consider gold, the world’s most widely accepted store of value. As of the end of 2020, there is a total of 201,296 tons of gold all over the world. On the other hand, approximately 3,200 tons of gold were mined and put into circulation in the same year. In this case, the stock / flow (SF) ratio of gold is calculated as 62. In other words, it takes 62 years to reproduce the total gold reserves existing in the world.

In contrast, the stocks and flows of commodities such as palladium and platinum are almost equal, and the flow surpasses the stock in some cases. For example, while there were 86 tons of platinum in 2019, the amount produced in the same year was 229 tons. This means that the SF value of platinum is 0.4.

Bitcoin, on the other hand, has a fixed rate of production as well as a limited supply. Miners who verify transactions on the Bitcoin blockchain network receive a BTC reward for each block they create, thus bringing new Bitcoins into circulation. Bitcoin production rate is regulated by a mechanism called halving.

What is halving, how does it matter in the stock flow model?

Bitcoin miners received 50 BTC rewards for each block they created at the time the cryptocurrency first appeared. Bitcoin blocks are created in an average of 10 minutes. That is, 50 Bitcoins were circulating every 10 minutes.

The halving mechanism aims to maintain the rarity of crypto money by reducing this production rate over time. For this reason, the reward given to miners is reduced by half every 210 thousand blocks, that is, approximately every 4 years.

The Bitcoin block reward fell to 6.25 Bitcoin after the last halving in May 2020. This means that an average of 900 new Bitcoins are put into circulation every day and 328,500 new Bitcoins annually. In this case, Bitcoin’s stock / flow is calculated as 52.

Bitcoin’s stock flow was measured at 27 before the last halving. So cryptocurrency is becoming increasingly rare thanks to halving and is approaching the position of storage tools such as gold.

On the other hand, gold does not have a mechanism to reduce inflation like Bitcoin and therefore the stock / flow ratio is expected to change over time. The halving mechanism will continue to operate until the last Bitcoin is mined. Calculations show that after the 33rd halving, the block reward will decline to exactly 0 BTC. It will take 132 years for 33 halvings to happen. So Bitcoin’s stock / flow ratio will continue to increase until 2140.

Price predictions of the stock flow model for Bitcoin

The stock flow model calculates Bitcoin’s stock / flow ratio and graphs it linearly. The actual price performance of BTC is reflected in dots. The colors of the dots that change in a spectrum from red to blue show how long it will take until the next halving. Red represents the furthest point and blue represents the closest point. 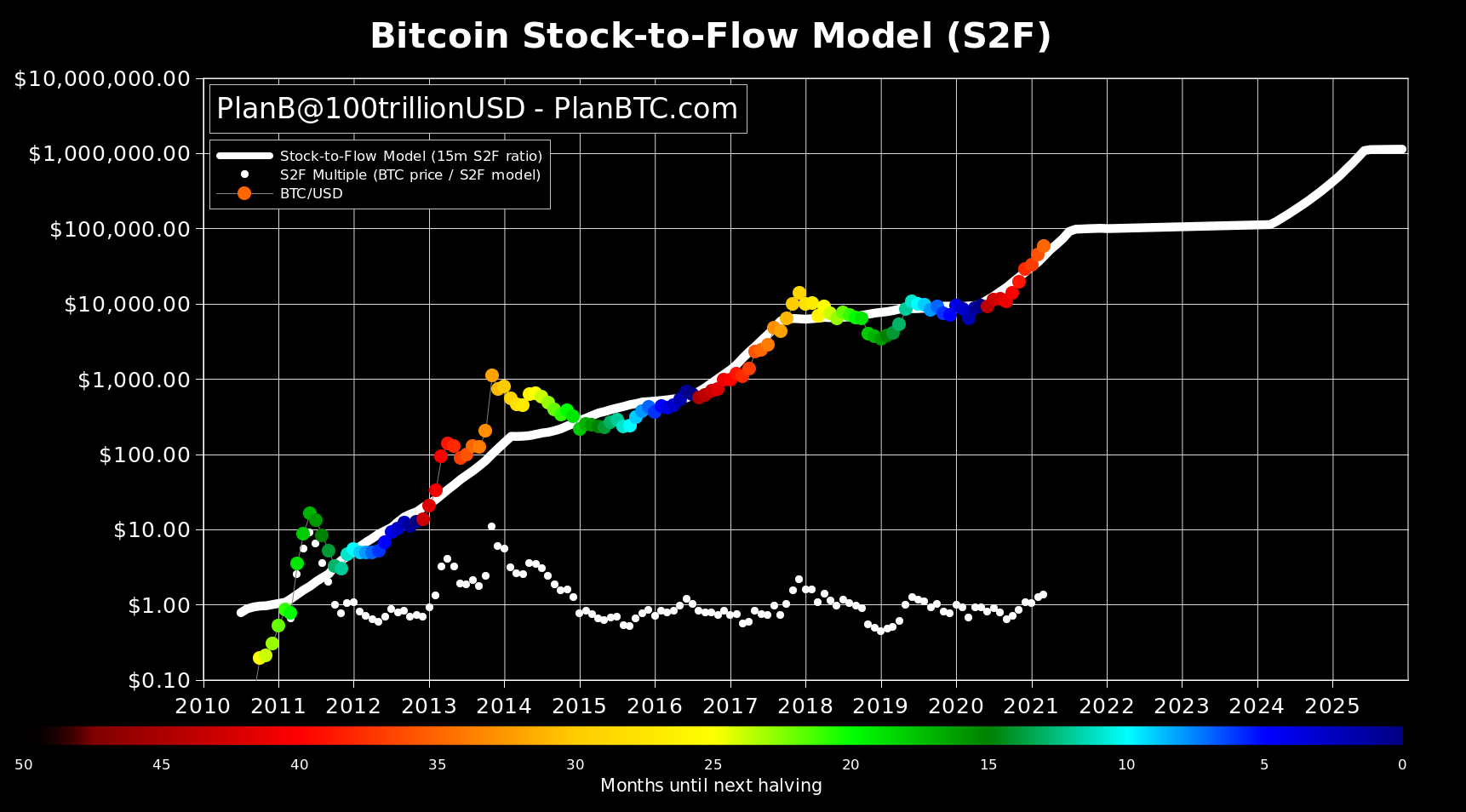 The 2021 year-end forecast of the Bitcoin stock flow model is one of the hot topics right now. The model predicts that the BTC price will be somewhere between $ 100k and $ 288k by the end of the year.

The stock flow model has been successful so far in its forecasts. Bitcoin performed exactly as the model predicted in 2021, closing January at $ 33,141 and February at $ 45,240.

Reminding: No technical indicator alone is sufficient to predict prices. As with almost every indicator data, the stock flow model makes sense when used in conjunction with other market data.

DISCLAIMER: The statements contained here are not investment advice. Never trade without researching the markets thoroughly and without comments from different circles. Read the comments of the investors you trust, consult their opinions. Remember that every trading transaction involves risk. Make your own decision when taking any action. Cointelegraph cannot be considered directly or indirectly responsible for any damages or losses arising or allegedly arising from investment products or services.

The post, which summarizes a TRM investigation, says Suex began operations “under the corporate ownership” …