Vaccine Crisis in Europe May Melt Cocoa and Chocolate Demand

Nearly 3,000 miles from Barry Callebaut’s (SIX 🙂 head office in Zurich, Ghanaian traders anxiously anticipate how the chocolate maker will respond to the European debate over the AstraZeneca (NASDAQ 🙂 vaccine.

The company’s reaction will be important, especially how much cocoa beans it will grind to produce world-famous chocolate and other cocoa-based products by the end of this quarter.

There are other reasons behind the Ghanaian traders’ concerns.

Ghana and its neighbor, Ivory Coast, are the world’s largest cocoa producers, and a 7% drop in cocoa prices this month alone could hit the economies of both African countries. 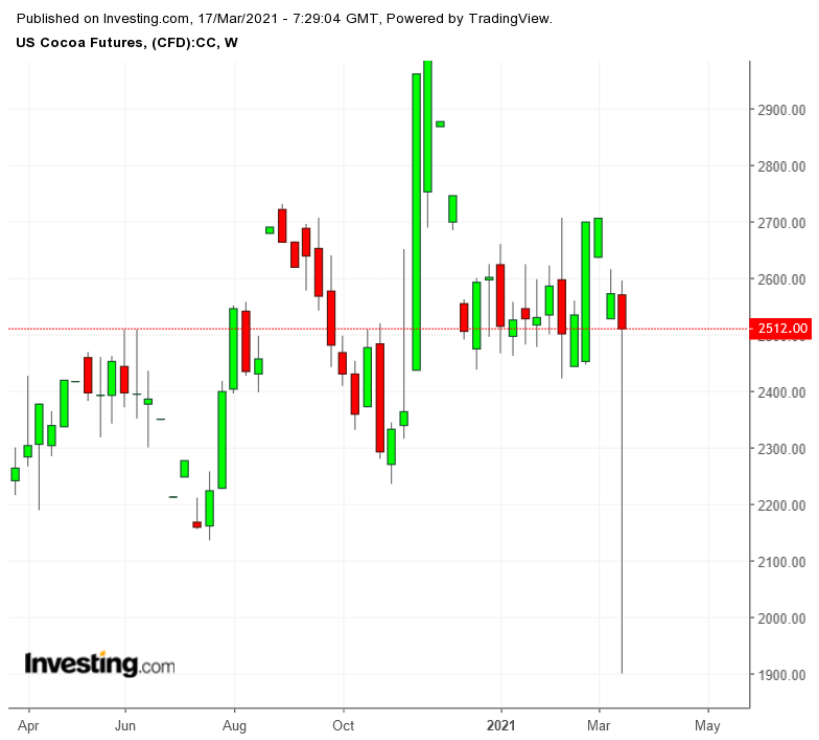 On the other hand, Barry Callebaut is the world’s largest chocolate company and Switzerland is the largest chocolate producer after Germany. Both countries are at the center of the COVID-19 vaccination crisis in Europe. While Germany led the group of at least 10 countries in the bloc that stopped the administration of the AstraZeneca vaccine, Switzerland had expressed doubts about the vaccine before this controversial process and may postpone the approval process further.

According to Jack Scoville of Chicago-based Price Futures Group, the risks in cocoa and chocolate transactions are great:

“Cocoa futures seem to be pricing higher supply against weakening demand at this point.”

“Demand will improve with the introduction of COVID-19 vaccines and financial incentives for at least some governments to their economies.”

For the market, this may seem easy to say.

COVID-19 is already making a significant impact on the demand for chocolates, a luxury food product.

According to the news published by Foodbusinessnews.net last month, premium chocolate products connected to travel (airports and hotels), food service and specialty boutiques were affected much more negatively from the epidemic.

Another sign that the situation is not good: Belgian chocolate maker Godiva has decided to close 128 retail chocolate stores and cafes in North America by the end of this month.

This decision was made despite the fact that North American cocoa millings showed a surprising increase of 7% in the last quarter of 2020 compared to the same period last year. However, according to Blommer Chocolate Co analyst Jeff Rasinski, this increase may be more of a statistical anomaly rather than an increase in demand. Proof of this is that North American milling for the whole of 2020, according to Rasinski, is 3.5% lower than last year.

In Europe, the region with the highest chocolate consumption, fourth-quarter cocoa milling decreased by 3.1% compared to the same period last year, while the rate of decrease in Asia was 4.2%. For the whole of 2020, Europe and Asia decreased by 3.9% and 5%, respectively.

Nearly 100,000 tonnes of cocoa beans at cooperatives and farms, or about a third of monthly deliveries, were not delivered, according to Reuters and other news agencies. Some European buyers and the US demanded that deliveries scheduled for the last quarter of 2020 be delayed due to weak export demand.

The $ 400 per ton livelihood difference (LID) introduced on October 1 by Ivory Coast and Ghana (2020-21 harvest), which accounts for about 60% of global cocoa bean production, also complicated the situation. In both countries, the income difference, which was added to the cocoa bean sales price, started to be taken over by transferring it to West African farmers in financially difficult conditions. While the concept of sustainability received broad support from the world’s leading cocoa processors, it did not address the realities of the market — lower prices if demand weakens.

Reuters announced last month that the GNI, the local cocoa association of the Ivory Coast, made a request to the cocoa regulator to implement reforms to end the domination of multinational companies in cocoa exports. According to GNI, six companies — Barry Callebaut, Cargill, Ecom, Olam (OTC :), Sucden, and Touton — dominate exports in Ivory Coast, and the leading chocolate producers usually purchase from these six names rather than companies represented by GNI. prefers.

The International Cocoa Organization stated last month that the expectation of a surplus in production and low levels of demand contributed to the decline in cocoa prices since the beginning of this year. On Wednesday, cocoa futures traded in New York were at around $ 2,530 per ton. The contract closed the month of November at $ 3,008.

The Impact of COVID-19 on Cocoa Pushes Ghana

In Ghana, on the other hand, cocoa; The three major commodities — and cocoa — account for more than 80% of export revenue generated. Classified by UNCTAD as commodity-linked, Ghana is vulnerable to sharp drops in commodity prices.

Since the onset of the COVID-19 pandemic, oil demand has also weakened, with the sharp decline in industrial production, trade, travel and cargo ship activity, and a steep drop in prices as a result.

Ghana is the second largest producer of cocoa beans in the world and an estimated 1 million Ghanaian small farmers and communities earn their livelihood directly from cocoa.

Even though oil and oil only accounted for 3.8% of Ghana’s GDP in 2018, revenues from the newly established local oil and gas industry had serious impacts on Ghana’s macroeconomics.

Gold was the only commodity that performed well among Ghana’s major exports. The country is Africa’s largest gold producer. The demand — and price — of gold rose.

For this reason, the effects of the drop in oil and cocoa prices have been very serious. Ghana’s credit rating was lowered to B- in September 2020, and the International Monetary Fund approved a $ 1 billion grant to secure the country’s creditors. At the end of 2020, GDP growth was 0.9%.

Beth Daley, editor and general director of The Conversation, talked about the impact of the epidemic on Ghana and cocoa in a blog post she wrote last month:

“The COVID-19 crisis hit Ghana and other commodity-based economies through three channels of influence that reinforce each other: the price channel, the supply chain channel, and the finance channel.”

Cocoa Technical Indicators: No Price Recovery On Charts Yet

As with all predictions, I recommend that you keep track of the graphs but include the basics as much as possible into your assessment.

Explanation: In order to add variety to his analysis in every market he examines, Barani Krishnan includes various opinions that are not his own. It does not hold an asset or position in the commodities or securities it has written.