Can Boeing Stocks Still Be Taken After a 28% Rise in Just One Month?

Boeing (NYSE 🙂 stock gained 28% in the past month. Behind this rise of the aviation giant, which has gone through difficult times, lies investor optimism that the worst of the crises it has faced in the past two years are over. 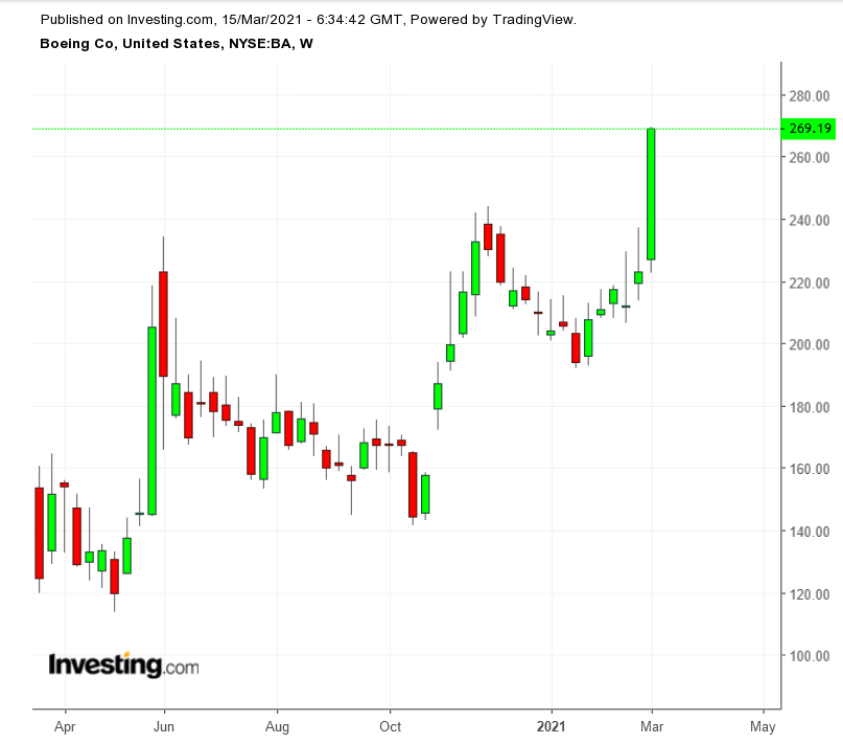 The stock gained more than 20% in just the last five trading days, closing Friday at $ 269.19. The momentum in BA stocks is so strong this time that it is more than three times the returns of their 2021 bullish Index.

In addition to Boeing, there is a general rally in other circular stocks — such as airlines, cruise ship operators, and retailers — as investors shift their capital to regions whose fates are closely tied to the reopening of the economy after the coronavirus.

The rally at the Chicago-based aircraft manufacturer is particularly impressive. Boeing was struggling with the epidemic collapse in air travel, with the 737 MAX models withdrawing from flights for more than a year after two plane crashes due to faulty flight control systems.

Recent developments point to the return of Boeing’s 737 MAX model with a re-flight permit from regulators, together with airlines to buy the popular model. Last week, Boeing announced to investors that the number of new orders for its commercial aircraft in February for the first time after the last 15 months was above the order cancellations.

The company received 82 new aircraft orders in February, recorded 51 order cancellations and delivered 22 commercial aircraft orders, of which 18 were 737 MAX models. After two accidents that killed 346 people in total, the MAX model was withdrawn from the flight in the USA from March 2019 to last November.

How Long Can This Rally Last?

The number of 737 MAXs currently in service has exceeded 100, as airlines in the USA, Brazil and Europe have reintroduced the aircraft that received the re-flight license. According to data from aviation analytics firm Cirium, more than 1,300 flights were carried out on the week of March 3, while approximately 400 of them were flights belonging to the American Airlines Group (NASDAQ :).

While these positive developments are important to rebuild confidence in the industry giant, the rapid rise in stocks makes many investors question how long this rally can continue. Despite recent gains, Boeing stock is still 40% below its record high of $ 440.62 on March 1, 2019.

Canaccord Genuity analysts raised their price targets from “hold” to “buy” for the Boeing share on Friday, as the 737 MAX returned to service, the outlook for travel improved, and the market for wide-bodied, long-range aircraft stabilized, raising their price target from $ 200 to $ 275.

“While the improvement in BA’s wide-body models will take a much longer time, we expect to see a stabilization in the production rates of the 787 and 777 models towards 2022-2023.”

“However, we believe BA will see an increase in new orders after a few quarters of very low activity, thanks to the increase in air travel and continued incentives.”

Despite this bullish move in BA stocks, the analyst community generally does not think that there will be a very significant rise from this point forward, as there are still many hurdles for the airline industry to fully recover from the global collapse in travel.

Boeing completed one of the worst years in its century-old history, with a total book value reduction of $ 8.3 billion. Much of this loss was due to the company’s decision to delay production of the 777X models and announcement that deliveries will not begin until late 2023. This move indicates that regulators will grant new aircraft models a much longer flight license after the MAX debacle.

Half of the 25 analysts who track the stock still give a “hold” rating for the stock, and the consensus 12-month price target is about $ 232 per share.

Boeing stock benefits from the trend of shifting investors’ capital from high-growth stocks to industrial names struggling during the epidemic in the short term. This rise and the improvement in outlook for MAX models is reflected in the current share price.

However, in our opinion, it will take years for the travel industry to return to normal, and the blow to Boeing’s earnings will be permanent. After the final move, traders should wait on the sidelines for a better entry point.