Highlights of the Day: Domestic Reform Package, US Bond Interest Rate On The Global Side

President Erdogan announced today. Reform means fundamental change and improvement in the field in which it was made, but when we looked at the content in the package announced today, we saw a compilation of previously planned parts rather than changes. We don’t see this negatively, of course it will definitely be fine if implemented. However, we can say that the expectation under the name of reform in the markets remained limited due to the fact that it was considered as a more radical change.

Especially in the agricultural sector, there are not many radical changes that will reduce the cost of the farmer and at the same time increase his productivity. If we show the support in the epidemic process as reform, the USA is making great reforms in this process!

What we see as important are the tax cuts for narrow-scale tradesmen, commissions for tracking food prices, and hardware and digitalization, together with newly created coordination.

The announced package did not create a significant positive pricing on the exchange rate and stock market side. As during the week, pricing continues depending on global developments. With the 10-year bond interest rising to 1.60% again in the USA, it continues to move towards the level of 92.0, and there are decreases in the currencies of the developing countries. Today, and while falling the most, the developed country’s currencies and against the dollar are also falling close to 1%.
Global markets have slightly reduced their response to the rise in bond yields last week and earlier this week, so while 1.50% is now normal, there is not much reaction up to 1.62%. However, if these increases continue, the dollar will continue to be positive, indices, gold and GOP negative pricing will continue. There are rises on the currency side, but there is no risky fast attack on the side yet, this is a positive situation for now.

When we look at the technical levels while closing the week;

After seeing 1.580 points, it holds at 1.550 levels. It was in the direction of pricing at the levels of 1.550 with the next sale near 1.575 points. In this sense, the situation is positive.
however, it remains weak. We have stated that we see below 1,500 points risky in the medium term and below 1,398 points in the short term and the level is below 1,398 points despite today’s rise. So let’s repeat that the loss on this side is also risky throughout the stock market.
We have reached the levels from 7.78 to 7.50 in exchange rate, this level is maintained even if there is an upper or lower movement during the day. The weekly closing above 7.42 can keep the rise alive and the activity may continue as it is next week. In the short term, we are following 7.87 above 7.42 and below 7.25.
Under $ 1,766, sales may continue due to the lack of strong support to $ 1,670. Will the $ 1,670 base be maintained in the short term? we will follow this. In order to increase purchases from this support, volatility in US bonds should stop.
Although we see TL 408 as a support in the short term, even though the exchange rate supports purchases on this support, it cannot support the ounce. For this reason, there is a loss of momentum near 425 TL. Pricing in this range may continue for a while. We think that 445 TL should be exceeded for the increase in the decreasing price in the short term. 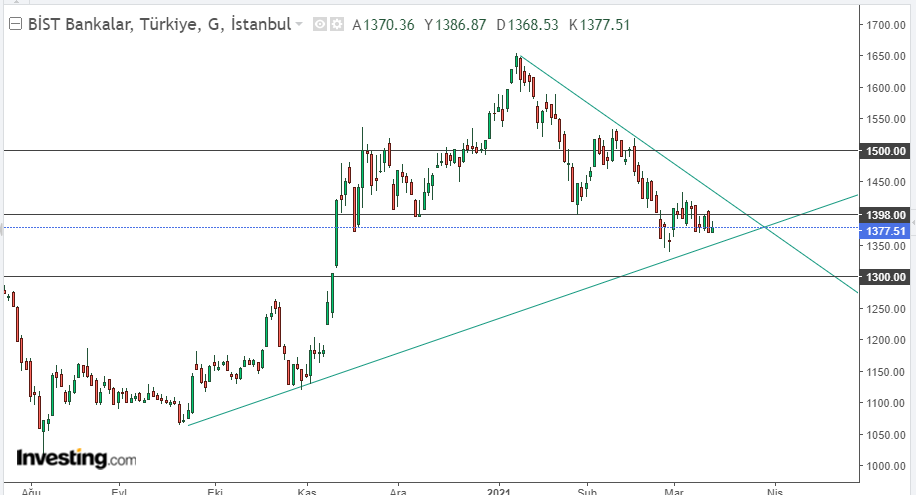 Banking Index March 12
Share
Previous OECD, Turkey and the 2021 growth forecast for the US doubled my poster Investing.co
Next Ethereum (ETH) Miners’ Rebellion Accelerated the Transition to ETH 2.0 ›CoinTürk