XRP price could bottom against Bitcoin if this pattern works

“Dogecoin rally could end on May 8”

Ripple will go public after litigation

Ripple (XRP) the currency, installed conducted on a stock exchange based in Turkey drew attention to the transfer process.

On March 5, by the Twitter account named Whale Alert, which tracks the loaded crypto money transfer transactions. shared In the message, it was stated that the transfer of 50 million XRP (approximately $ 23 million) was completed.

In the tweet, it was stated that this transfer was made from a wallet of the Paribu exchange to an unknown address. 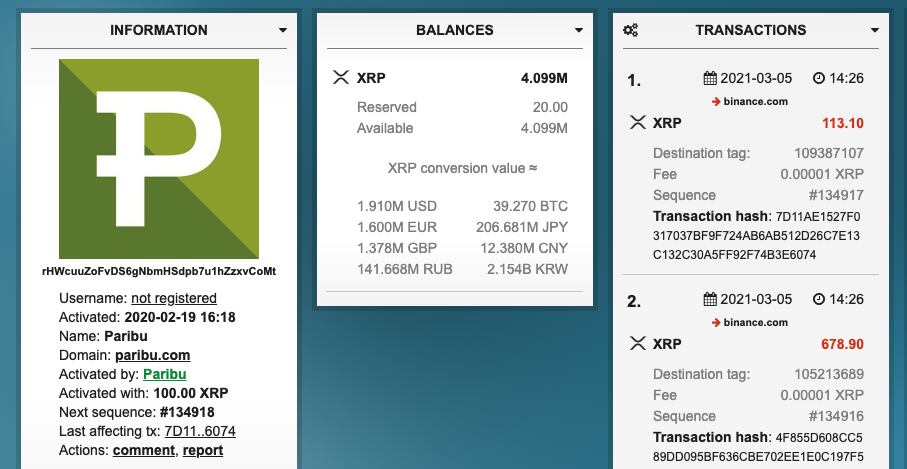 Wallet details of the sender of the transfer. Source: Bithomp

When the data on the on-chain data tracking site Bithomp is examined, it is confirmed that the sender account belongs to the Paribu exchange.

Wallet details of the recipient of the transfer. Source: Bithomp

On the other hand, when the details of the transaction are examined by the buyer, it is revealed that the account reached by the transfer also belongs to the Paribu stock exchange.

The transfer between the two wallets created by Paribu can belong to any investor, or it can be a transfer from the exchange’s hot wallet to the cold wallet.

Looking at the current status of the buyer account, it seems that there are 107.453 million XRP in it. This corresponds to a value of more than $ 49 million.

Share
Previous DeFi not slowing down: RGT increased by 72% in 24 hours
Next Institutional investors stay away from Bitcoin for these two reasons.