Chart of the Day: Bull Flag in FTSE

At the time of this writing, there was some risk-averse mood in the markets, and while European stocks had a weak opening, the US futures were skewed. Some investors seemed happy to sell profits from their long positions in stocks ahead of the long weekend until Monday, when the banks were closed for President’s Day.

Chinese markets will be closed until Tuesday due to the Spring Festival. Crude oil and copper prices also fell slightly. While the future looks brighter in the US with COVID-19 vaccinations, Thursday’s weak unemployment benefit claims report and Friday’s wage growth report point to weak conditions in the world’s largest economy.

However, although there may be some profit sales in the US markets, the UK’s Index has not followed a very good line lately, and may struggle to catch up for a while, especially with some decline in the pound.

In fact, I have an expectation of a serious rise in FTSE. With a no-deal Brexit blocked at the end of last year and the UK ahead of its neighbors in the vaccination race, the economy will recover faster with curfews lifted. Data released this morning showed that the UK economy was already recovering strongly in December, and its fourth quarter GDP was stronger than expectations, at 1% compared to 0.5%.

The problem facing the FTSE was the rally in sterling. FTSE 100 members derive the bulk of their profits from their activities in other countries. When the profits of these multinational companies in foreign countries are converted into pounds sterling, they do not paint a good picture as they are in dollar and euro terms. The strengthening sterling is also bad for UK exports, as it makes the goods and services sold more expensive in other countries.

Still, with favorable fiscal conditions in the UK and globally and high government spending, I think the FTSE will rise over time, with investors pricing a strong economic recovery no matter what the sterling takes in this period.

In fact, the FTSE, now in a bull flag model, is preparing for a potentially big breakout: 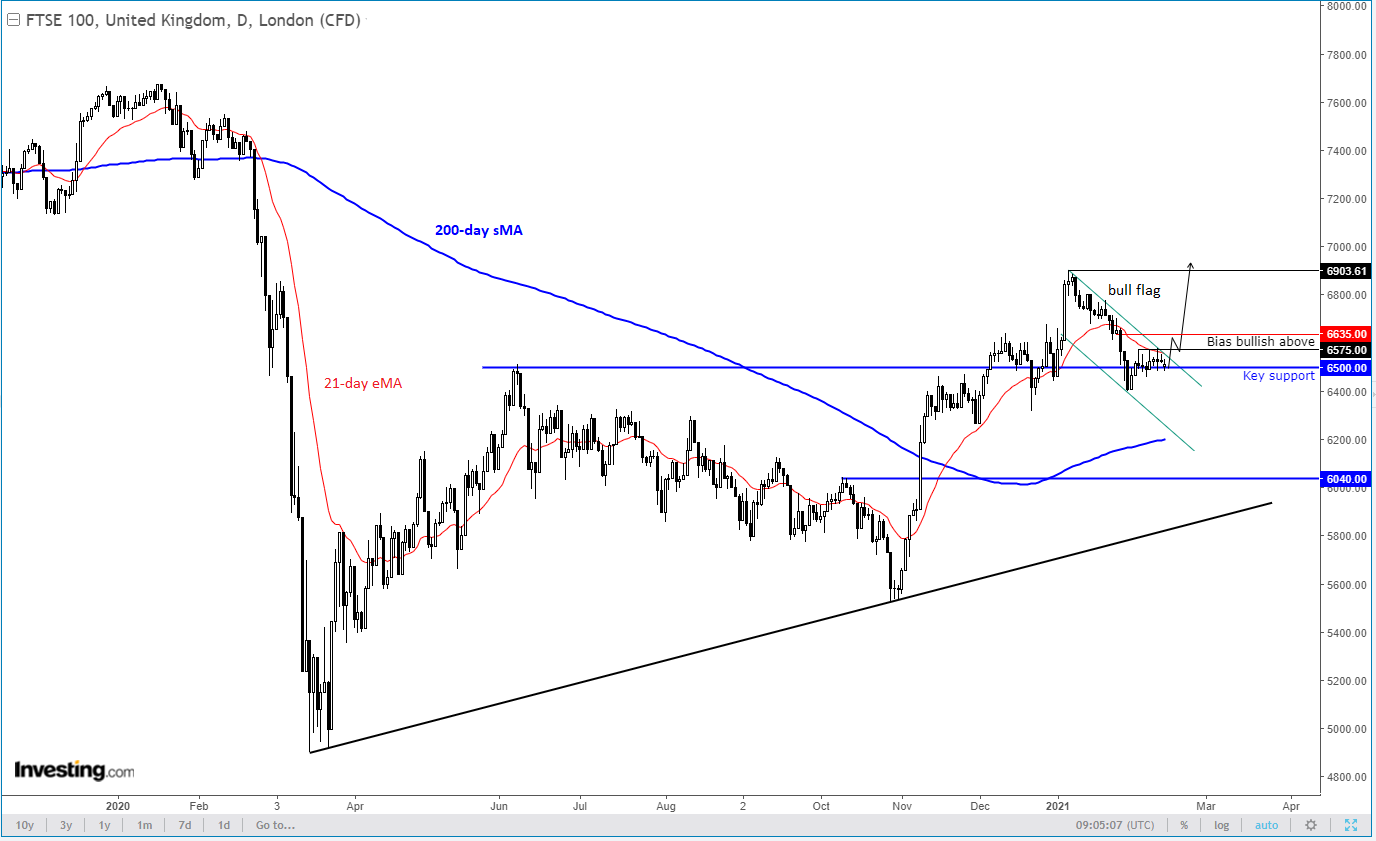 If the index manages to hold onto the key support in the 6500 zone being tested at the time of this writing, a breakout above the bull flag’s resistance trend could be as early as today.

If this happens today or early next week, the FTSE could start a serious rally.

The trigger point will likely be the 6575 level, which is the last recorded high. A move above this level could cause a sudden jump to the next zone around 6635. After that, there is not much resistance until this year’s peak in the 6900 zone.

Potentially, however, the dollar FTSE could climb much higher over time due to the macro reasons mentioned above.

However, the bulls must remain patient and wait for the right exit above the bullish channel before looking at potential long position trades.