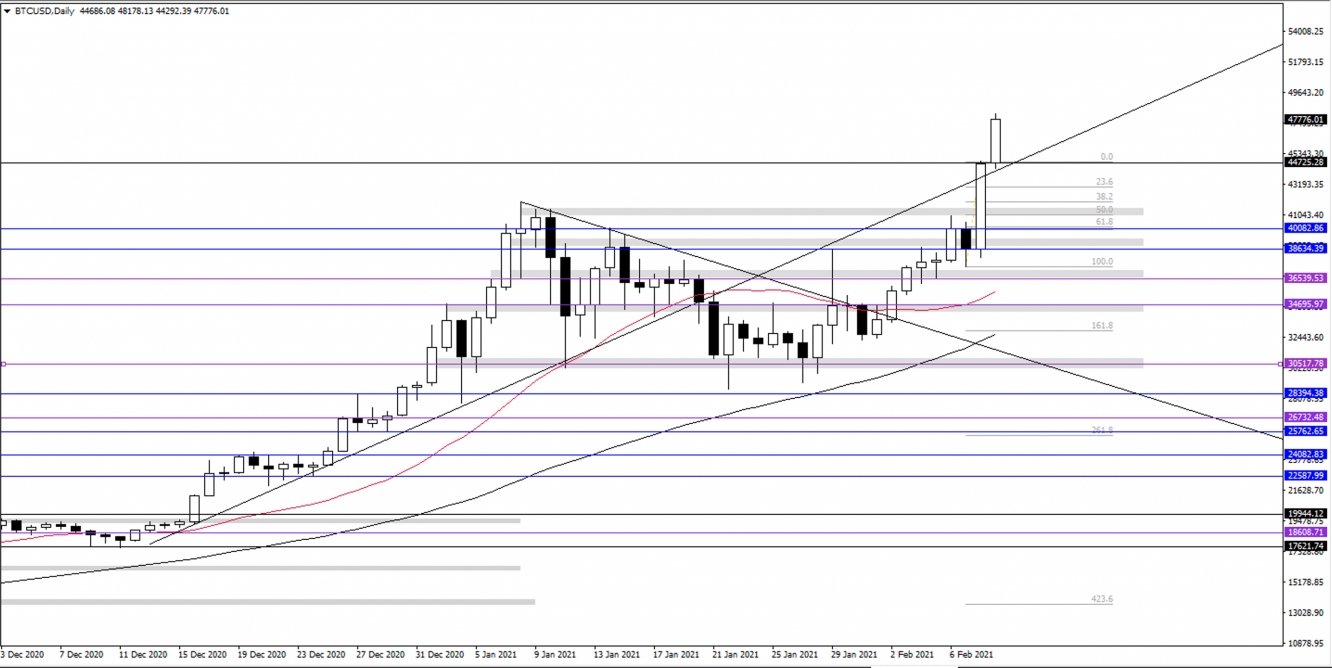 In the Bitcoin / Dollar charts, which rose after Tesla’s announcement to the SEC last day, we recorded an increase from 38,000 to 47,000 in the same day. The fact that the first bullish wave has retreated only to the level of 23.6% fibonacci can be considered as one of the factors that shows the high upward momentum.

On the upside, psychological resistance is expected at 50,000 level above the 48,180 peak resistance, which is the highest price of the day. The latest resistance is fibonacci expecting 161.8% resistance at 51.550.

We can say that sales-oriented transactions involve a high risk rate due to their reverse trend nature. On the other hand, the advantageous areas for buying were around 34,700 and 43,060, the last two break regions. Entries at the current price may be considered low in terms of risk / earnings ratio. Therefore, evaluating purchases from withdrawals may offer more advantageous positions.

It confirmed the OBO formation on the 1H charts in the past day and dropped to 90,700. For the index that finds short-term support in this region, the price action that will occur today is critical. The index expects psychological support at 90,700 and historical support at 90,631 below it. Below these levels, the playing field expands to levels 90,470 and 90,310. Therefore, the daily candle that will close below 90,630 will increase the selling pressure.

On the other hand, it should not be forgotten that the price is in a region with a high risk / profit ratio for buying-side transactions. If the price confirms the 90,700 support and there is a signal that it will continue to move, the purchases can be evaluated. Low timeframe reversal patterns and bullish candlesticks are required for this signal confirmation. In this scenario, the price awaits the upside resistances 90.812 – 90.950 and 91.110.

In the ounce gold / dollar parity, the price started to rise with the weakening of the dollar index. The momentum mismatch in the low timeframe signals that the bullish wave is weakening. It is necessary to close candles above the 1850 level to regain the lost momentum. On the upside, the price awaits resistances of 1850, 1855 and 1875, respectively. The price levels 1821 and 1808 await as minor support in a possible retracement move. If the weakness of the price is confirmed, short selling-oriented transactions will be advantageous in terms of risk / earnings ratio. Candles close above 1855 are required for the purchases to be advantageous.

Share
Previous GameStop went up, Musk increased Bitcoin; Euro GDP – What’s happening in the markets? By Investing.com
Next G7 Countries May Be In Search Of The Profits You Earn From Cryptocurrencies • Coinexc