Chicago President Charles Evans expressed the view that inflation in the US is very low and the Fed has a long way to go until the inflation target of 2% is reached.

The World Economic Forum, held in Switzerland in January every year, will be held in Singapore on 17-20 August due to the epidemic.

In the statement made by the European Central Bank, it was stated that the Euro Zone economy coped well with the second wave of quarantine against coronavirus.

In Italy, former European Central Bank President Mario Draghi accepted the mandate to form a government. Draghi said that a full vaccination campaign is among the targets to beat the epidemic in the country.

With a 14.97% year-on-year increase in January, it came again above expectations after November and December. Monthly increase in consumer prices in January was recorded as 1.68%. Treasury and Finance Minister Lütfi Elvan, in his assessment of January inflation data

OPEC said after the 26th JMMC meeting that global oil demand is expected to remain uncertain in the coming months. It has been announced that OPEC and non-OPEC countries have reduced oil production by 2.1 billion barrels cumulatively since April 2020. 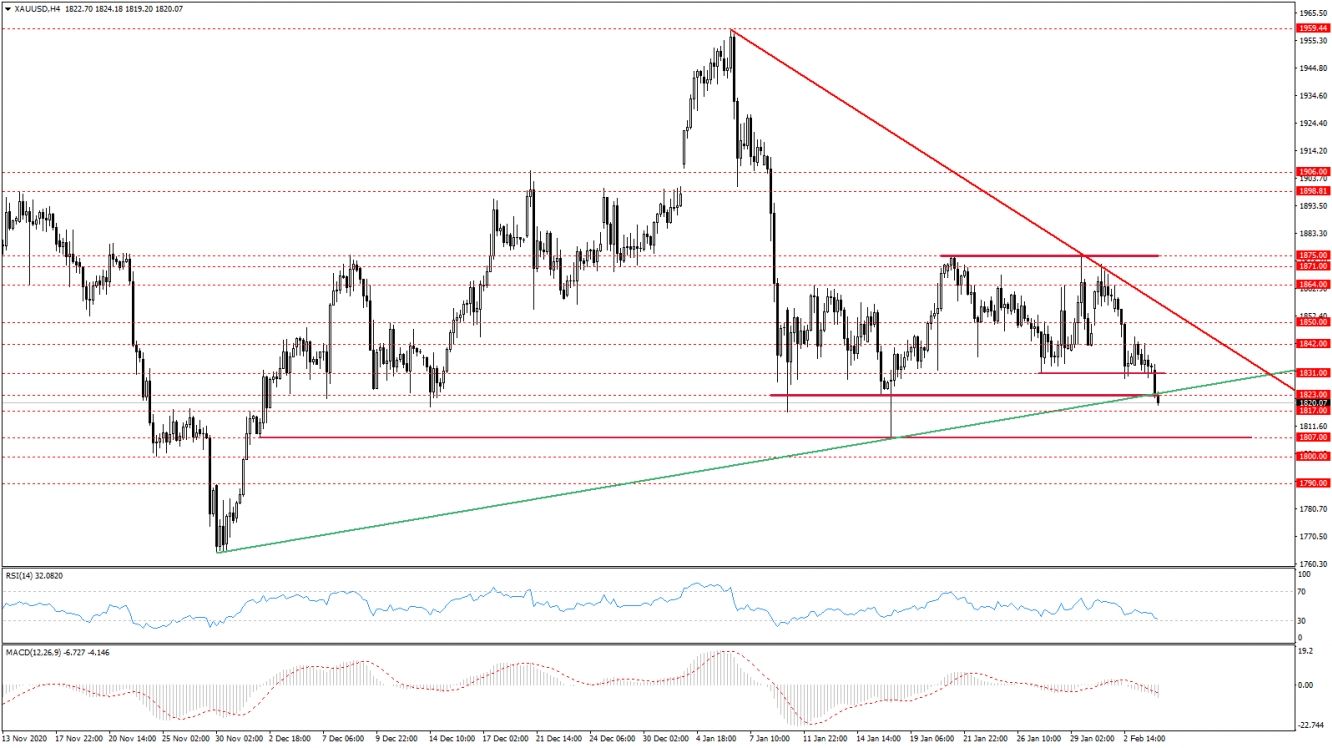 The price of ounce gold started to be priced below the rising trend that started in December last year. It is seen that the price, which was behind the support of 1823 dollars in the morning, declined towards the interim support of 1817. If the selling pressure continues, the $ 1807 level can be watched as the main support. In the upturns that can be experienced, $ 1831 can be followed as resistance. 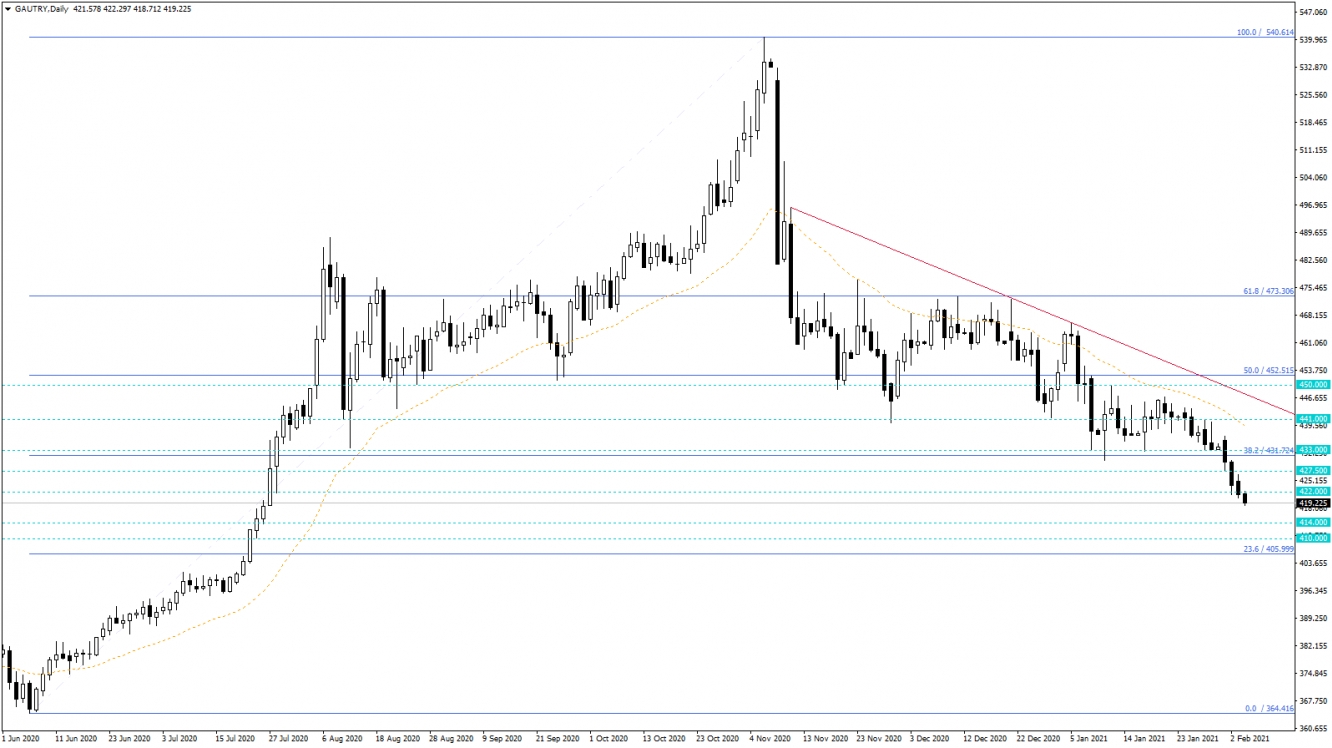 Gram gold price is trading at 419 liras in the morning after breaking the 430 lira support. The region between 431/433 liras can be viewed as the main resistance level in the rising trend that can be experienced in the movement continuing within the down trend. If the sales pressure continues, 414 and 410 lira levels can be viewed as intermediate support and 406 lira as the main support. 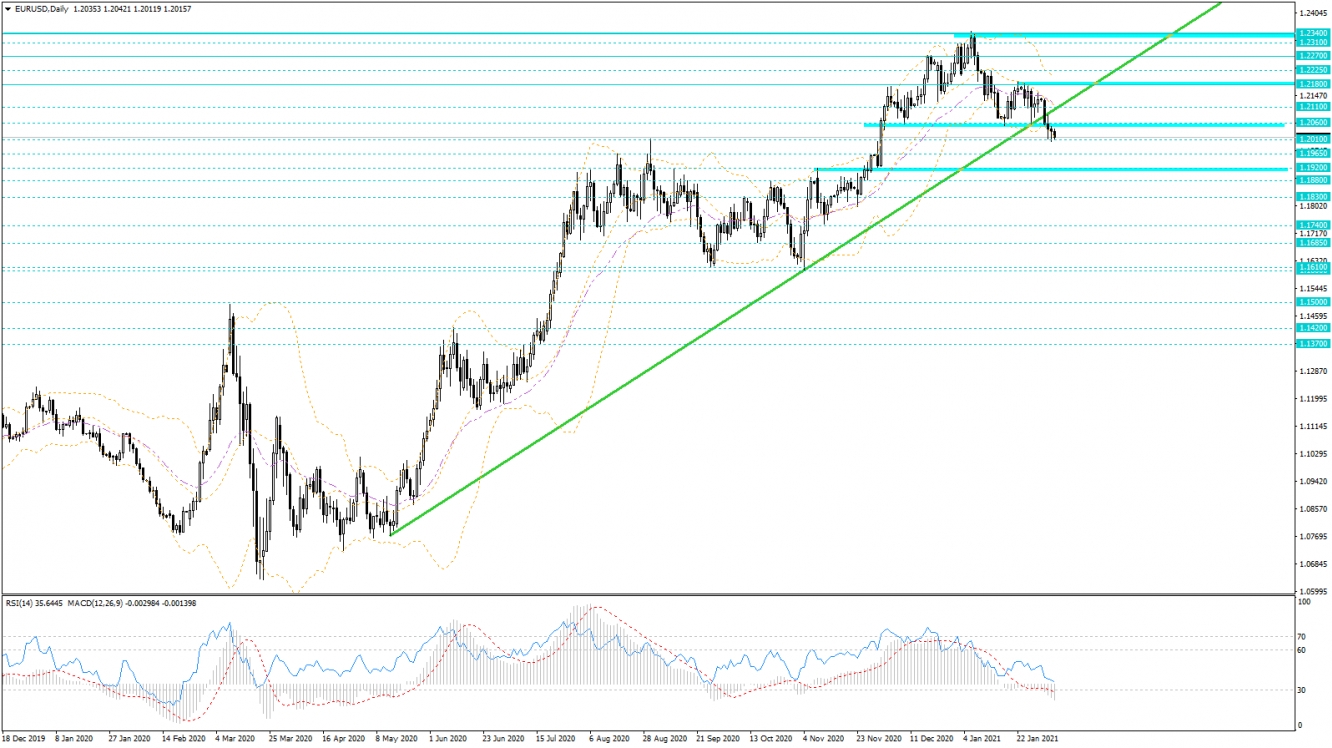 Euro / Dollar parity took 1.2010 intermediate support under pressure after breaking its upward trend. In the pair, where the short-term downward trend is dominant, the shoulder head and shoulder formation formed at the end of the uptrend is also broken. If the sales pressure continues, 1.1920 level can be seen as strong support. The 1.2110 level is an important point of resistance in any rising. 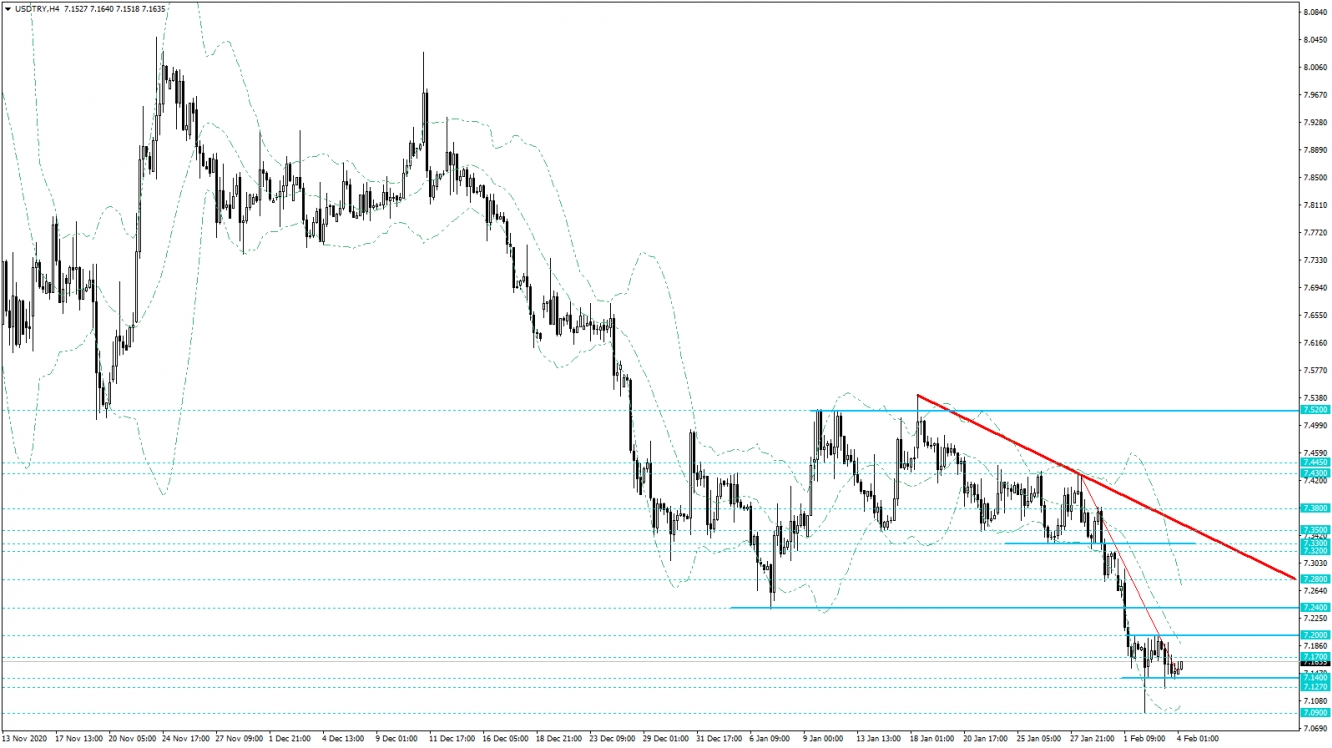 The USD / TRY parity started to be priced above the short-term and quite steep downward trend that started at the level of 7.43. It is seen that the pair, which declined to the level of 7.1270 yesterday morning, is trying to hold above the 7.14 support this morning. In the upturns that may be experienced, if the resistance is passed over the 7.20 resistance, the dynamism may continue towards the level of 7.24. If the sell wave continues, 7.09 is the first strong support level. 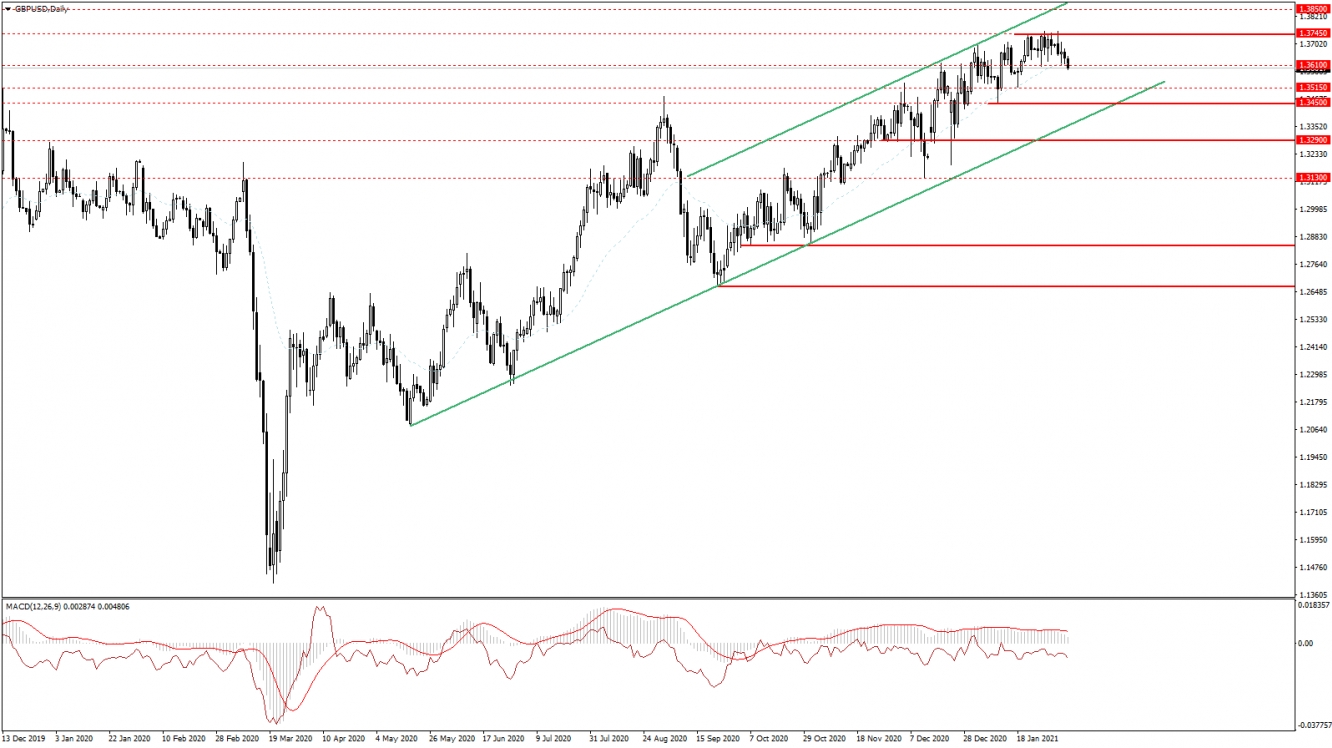 The pound / dollar parity started to take 1.3610 support in the morning hours. The 1.3350 region, where the trend has passed, is the most critical level of support for the retraces that may occur in the pricing continuing on the upward trend. Before, the 1.3515 and 1.3450 levels can be followed as support. 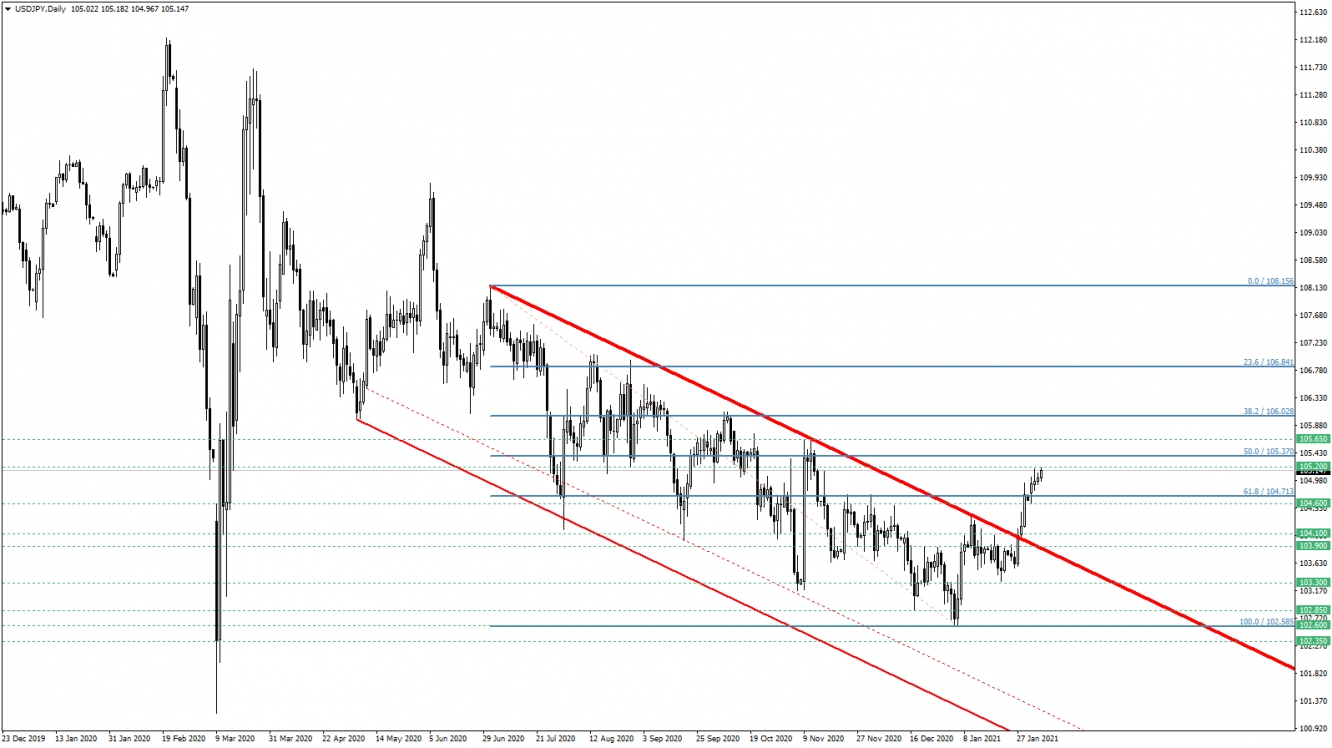 Dollar / Yen parity continues to rise towards 105.20 level this morning after breaking down trend. If the appreciation in the pair continues, it can be traced as the main resistance of 105.40, where the Fibonacci 50.0 level is located. In the withdrawals that may be experienced, the area between 104.70 / 104.60 where the Fibonacci 61.8 level is calculated can be observed as support.

In the dollar index, the neckline of the TOBO (Reverse Shoulder Head and Shoulder) formation, which we mentioned in our newsletter, was crossed. This level, after the name of crossing the neckline that corresponds to 90.930 levels, was tested as support and an image of approval was formed. The level of 91,600, which corresponds to the 100-day average in the upper area, can be viewed as the first resistance. If this level is exceeded, the rise towards the 92.100 / 92.800 region may gain speed.

In Brent oil, we stated in our newsletter that if the level of 56.10, which corresponds to the falling trend resistance, is exceeded, the increase may accelerate towards the 56.10 / 57.40 region. Oil tested 57.40 as support, making a comeback after breaking the 57.40 level. Oil, which gained strength after the level was tested as a support, is trading close to the 59.30 resistance in the morning. This level can be followed as initial resistance. The RSI indicator is seen near the resistance level. In possible withdrawals, 57,40 can be followed as support.

Silver saw strong profit sales following the completion of the bowl move towards the previous high. This level can be followed as the threshold line in silver, where sales continue towards the 26.10 level, which corresponds to the main support zone. In case of going gold, sales may deepen towards the 25.00 level, which corresponds to the rising trend support. The RSI indicator is in the uptrend support, while the MACD indicator continues its course in the positive area. In possible upward reaction purchases, the 26.60 / 27.00 levels can be viewed as the first resistance zone.

We stated in our bulletin that the Nasdaq index can retest the 13600 peak in movements above the 13400 level. The 13600 peak was passed below the 14000 support level with profit sales following retesting. If sales continue in the index, 13280 level can be followed as close support. If the 13600 level is exceeded in the upward movements, an upward potential may occur towards the 13800 level, which corresponds to the intermediate rising channel resistance.