Interest in These 5 Altcoins is Increasing, According to Data Analysis Company • Coinexc

The data analytics platform Santiment has announced a list of five altcoins that soared after growing interest among cryptocurrency traders.

“Altcoins such as XRP, UNI, VGX, CRV, and 1NCH have led the altcoin rise in the past 24 hours. The crowd interest (at least temporarily) has shifted away from Bitcoin (BTC) and Ethereum (ETH) as the foundations on the chain are used to describe the upcoming spikes.

What’s the case with UNI?

Santiment has shed light on UNI after the decentralized exchange (DEX) token hit its all-time high of $ 20. The cryptocurrency data analytics platform studied various on-chain signals to determine if the UNI is ready for a correction. Santiment says Uniswap remains the market leader in terms of volume and number of transactions (DEX), even if the platform no longer encourages users with yield farming rewards. 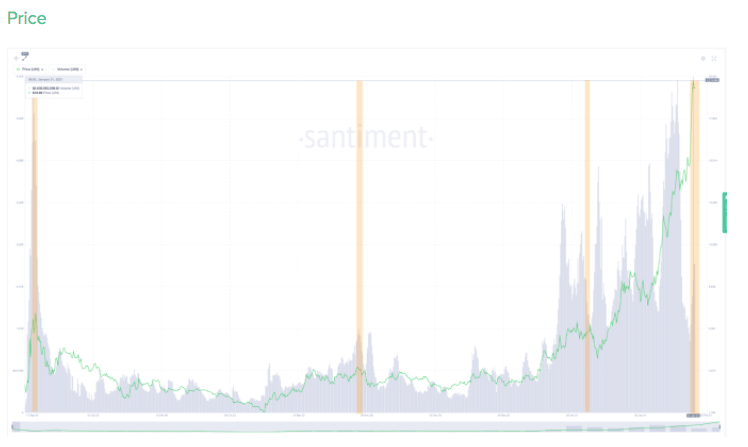 While activity on DEX continues to be strong, Santiment emphasizes that UNI’s price has risen amid a significant drop in volume. The firm says this difference indicates that a price reversal may be on the horizon.

Santiment adds that UNI’s social volume has skyrocketed to its highest in three months, another indication that a short-term peak may exist.

“As always, the crowd tends to be at the top of FOMO and suggest that this could be a local peak for UNI.”

The cryptocurrency analytics firm also stated that the increased supply of cryptocurrencies on exchanges is not a good sign for UNI.

As a result, Santiment expects that the new supply threat entering the market could cause the decline in the cryptocurrency for the UNI to peak first and then drop.

“It may be that the FOMOs are crowded and some market participants are sending their UNIs to the stock markets, creating a temporary peak. Considering the increase in the price of UNI, the community treasury is now a huge treasure (previously $ 500 million). Now they should have more than $ 1 billion. As the war chest becomes active, we’ll see more UNIs circulating, which may eventually result in some sales pressure. ”