A Week With Investor Wars and Speculation

World stock markets, which started the week with relatively weak risk appetite, fluctuated in the middle of the week with the organized moves of small investors and the volatility continues today with speculative movements.

The epidemic still dominates as the main scenario in the real movement in the markets this week, and the cash problem in China has also increased the pressure, including GOPs, but this different situation that started with GameStop, which was far from fundamental and speculative, continues with silver yesterday.

What is it, how is it, why does it occur? All of his questions are far from baseline and speculative, but far beyond traditional transactions. This may be called a change, but imagine that someone (the richest in the world!) Tweet of one creates tremendous volatility in prices. Elon Musk, who was previously Dogecoin, then GameStop and bitcoin prices today, may soon be declared a manipulator. In the US administration, the staff responsible for the market followed the work and one side said that it was good for Wall Street, which it thought was unfairly earning for years, so that they will learn to do the job well, while another side thinks that the follow-up from behind should continue depending on the effect of this on the stock markets. The losses and gains in recent days are at a record level, and this situation on its own indicates that things are going wrong and risky. We do not have a positive or negative orientation towards the reader regarding the movements that are far from this basis of economic fundamentals and that we will probably come across very often from now on, just like the choice of amateurs and professionals, the decision of the reader in the transactions is on his own initiative.

In domestic pricing and the rally in the world stock markets, we have always stated that we see it risky because the movements are not over the whole. This week, the domestic stock market is down, foreigners continue to buy bonds, the exchange rate is falling, and although iShares MSCI Turkey (NASDAQ 🙂 has recovered weekly, it is down almost 2% on a monthly basis. What do these mean?

Demand for certain indices, especially industry, outweighs the rise on the stock market side, but the strain on the locomotive side continues. We consider it risky that stocks and sub-indices do not act as a whole. The 1.470 point level, which we care about technically, is maintained daily and the main targeted purchases can continue for 1.550 points above this level.

Foreign investors preferred bonds according to the shares, and the purchase continued in the last week, this positive and exchange rate decreased to 7.27 and returned its earnings after the first week of the month. TL is among the currencies of the developing countries, which have the most volatility with both internal and external developments in recent years and are often the most affected by news flows. Therefore, the recent increase in the exchange rate has been limited and the desire to decline is very positive for the TL, but let’s underline that the exchange rate is still extremely high even though it declines after a record, but the target is a balanced pricing rather than a rapid fall. Therefore, we see the recent pricing in the exchange rate as positive.

As the week wraps up, the latest changes confirm the optimism in TL:

It is down close to 4% on a weekly basis, but not at levels to create a trend change.

This week it lost over 5% and its monthly loss approached 8%. (negative)

Slightly higher than per month but horizontal this week, this is positive.

After declining to 433 TL yesterday, it is preparing to close the week with a decrease below 440 TL. 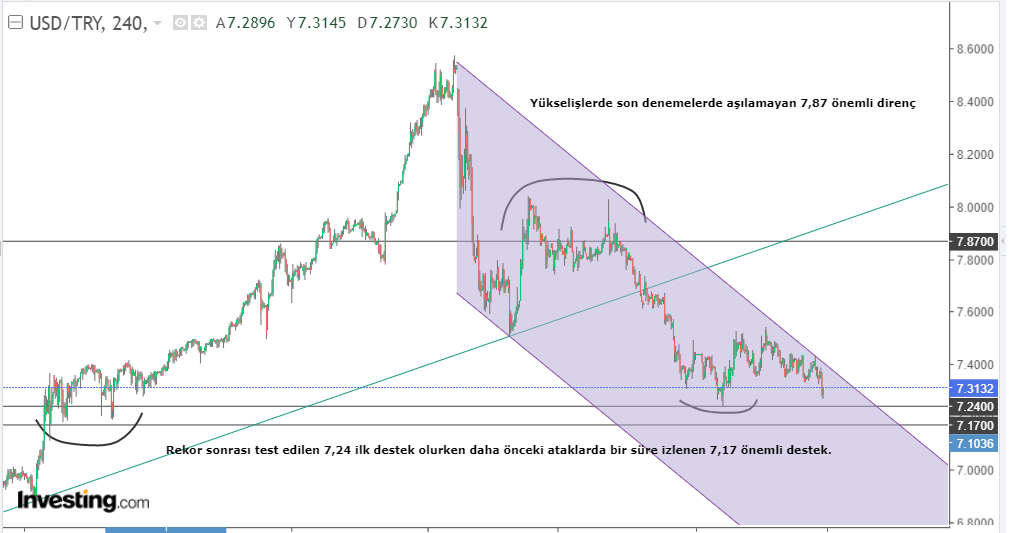 Share
Previous Economic Calendar – 5 Key Things To Watch This Week By Investing.com
Next As DeFi Grows Do Institutional Investors View Ether (ETH) as a Warehouse of Value?